Knocked out a bunch of little tasks on the right fuel tank tonight.  I received my Van’s order which contained all the parts and fittings I needed to install the fuel return line.  I decided to go with -6 line instead of the -4 I had originally planned, thankfully I made that decision before I ordered the parts :-). Heres all the new parts.  I also picked up some of the stock Vans tie-down rings while I was ordering stuff.  They were only a few bucks, cheaper than the shipping for them by theirselves. 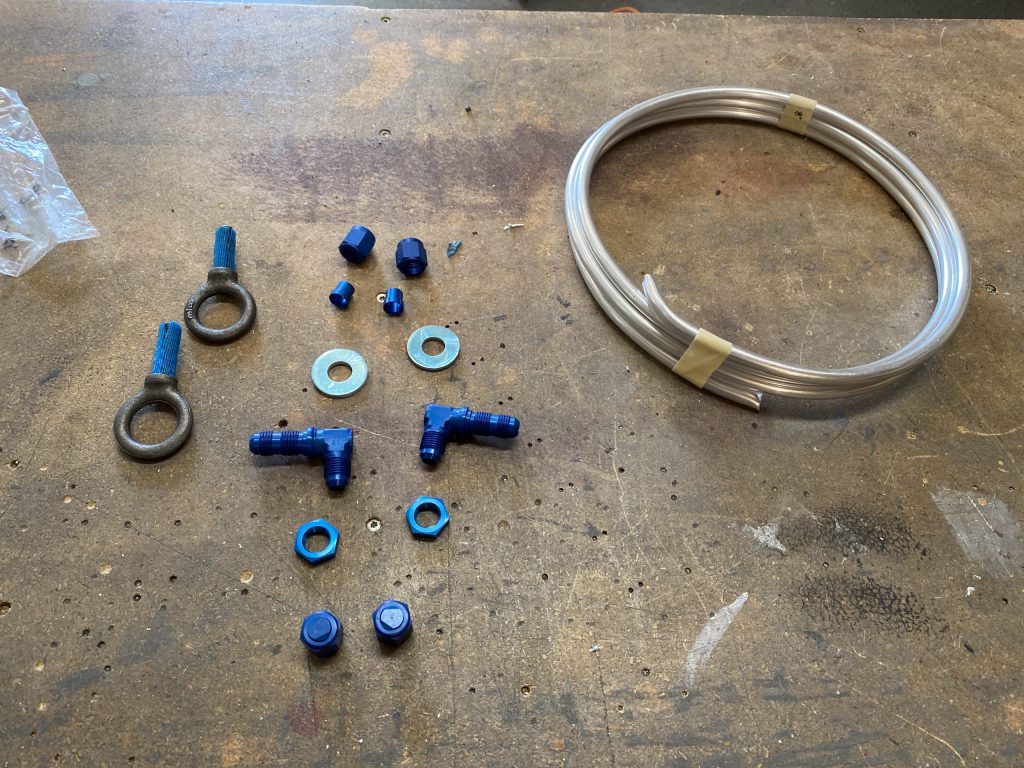 I also shot a time lapse of this build session.  Heres the video:

I needed to go ahead and get that fuel return installed so I can get the inboard outer rib on and done.  So I unrolled the 8′ feet of 1/8″ tubing, and cut it down to two 4′ lengths which is about the perfect size, deburring the freshly cut ends.  Next I installed the SB500-6 plastic bushings into the ribs, which is where the new return line will be going.  Then I inserted my return line and clecoed on the inboard outer rib to start making the bends on that fuel return line to meet up with the hole for the fitting.  I think I got it lined up pretty well (You can see the tube is centered in the hole): 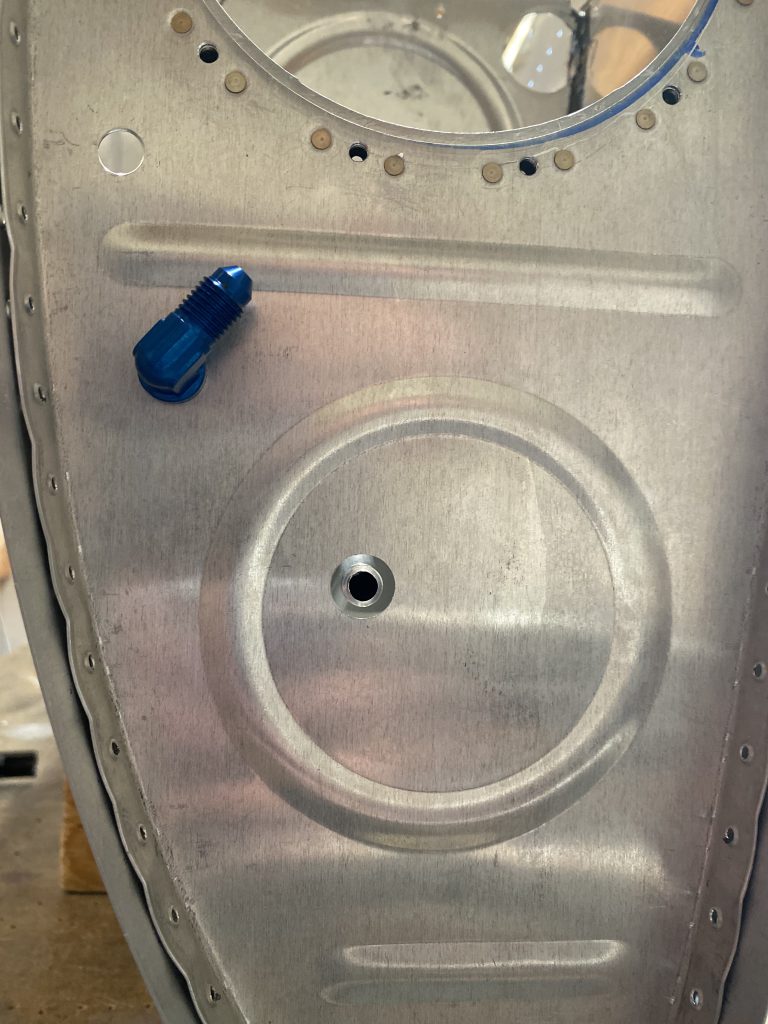 Now it was time to slip on the compression sleeve and nut, then flare the end for the fitting.  I used my flare tool to make this a breeze, double checking the flare wasn’t too big for the sleeve and nut. 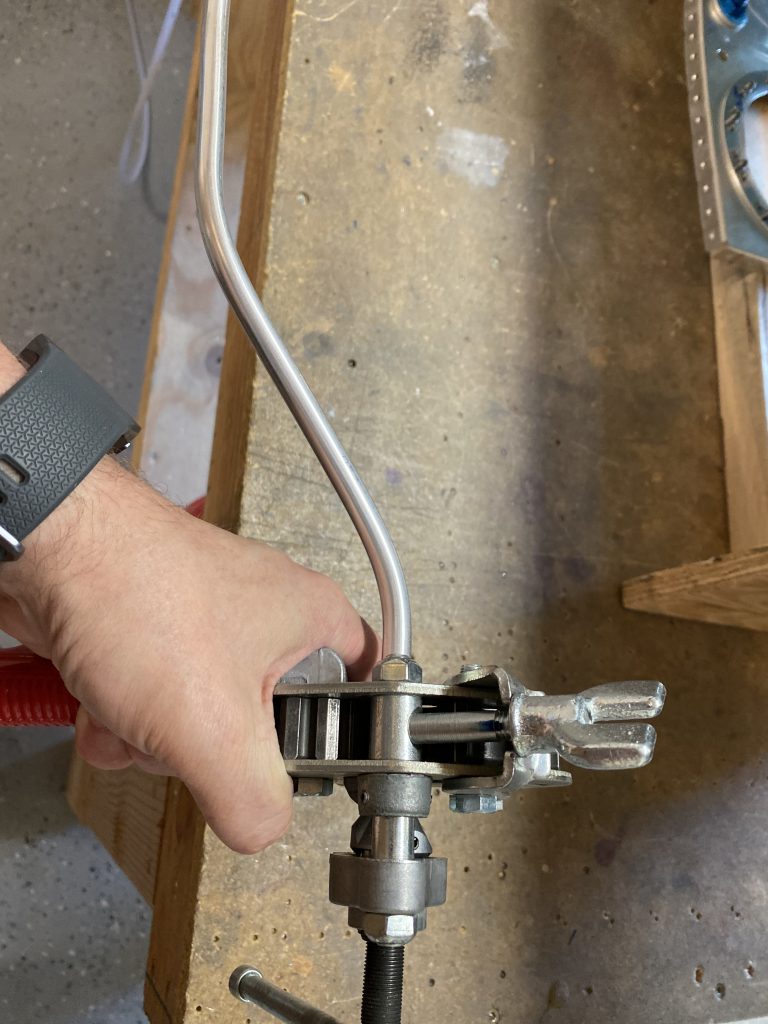 I gathered up all my fittings, did one last test fit to make sure orientations were correct and that I had all the pieces I needed, then scuffed the rib, and the washers really good with scotchbrite, and cleaned everything with MEK.  Making sure the threads were clean.  I even cleaned the BNC for the capacitive senders with MEK to give it a good chance of sealing.  Then I masked off the threads with masking tape to prevent them from fouling with sealant.  This later proved to be a bad idea, since I would need to thread the nut down anyways.  Cleaning the threads with MEK turned out to be an easier path. 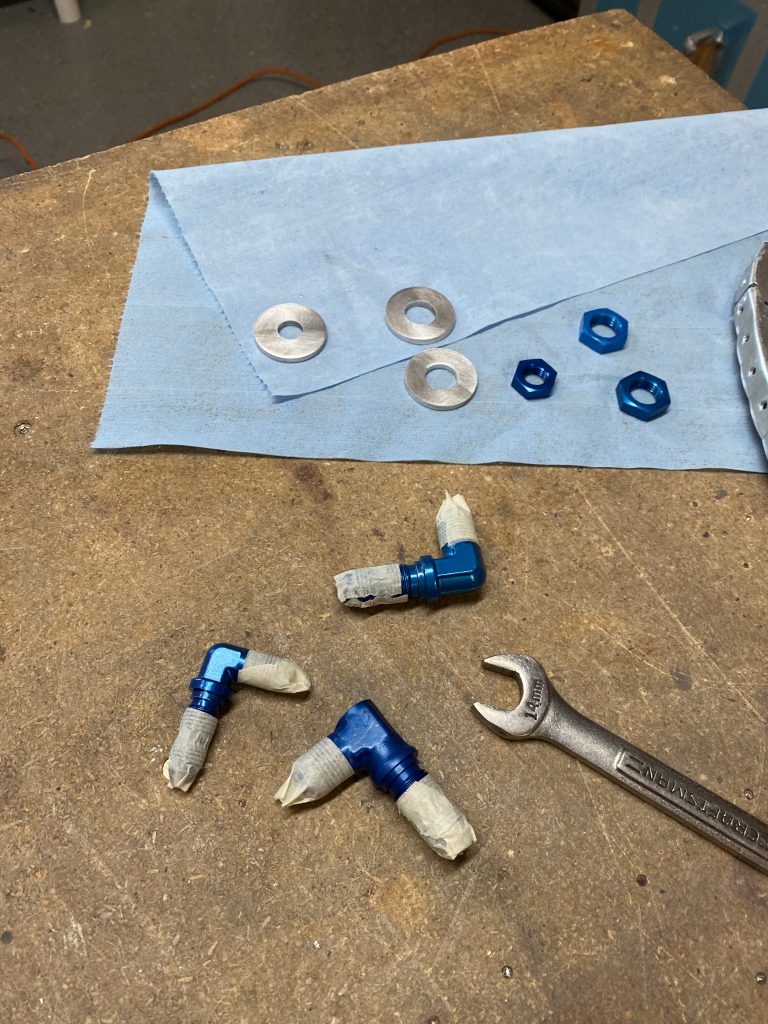 I decided to go ahead and thread the BNC into the rib without any sealant, getting it tight so it would have a good grounded connection.  Once I had it tightened I would cover the entire back of the BNC and its wire thoroughly with sealant anyways, which should prevent leaks as it would be totally encapsulated, while still maintaining a solid connection to the tank for its ground.  I hope this works and doesn’t leak, if it does, I can easily blob some sealant on the outside, even after the tank is fully done.  I still masked off the BNC connector because I know I am messing with sealant. 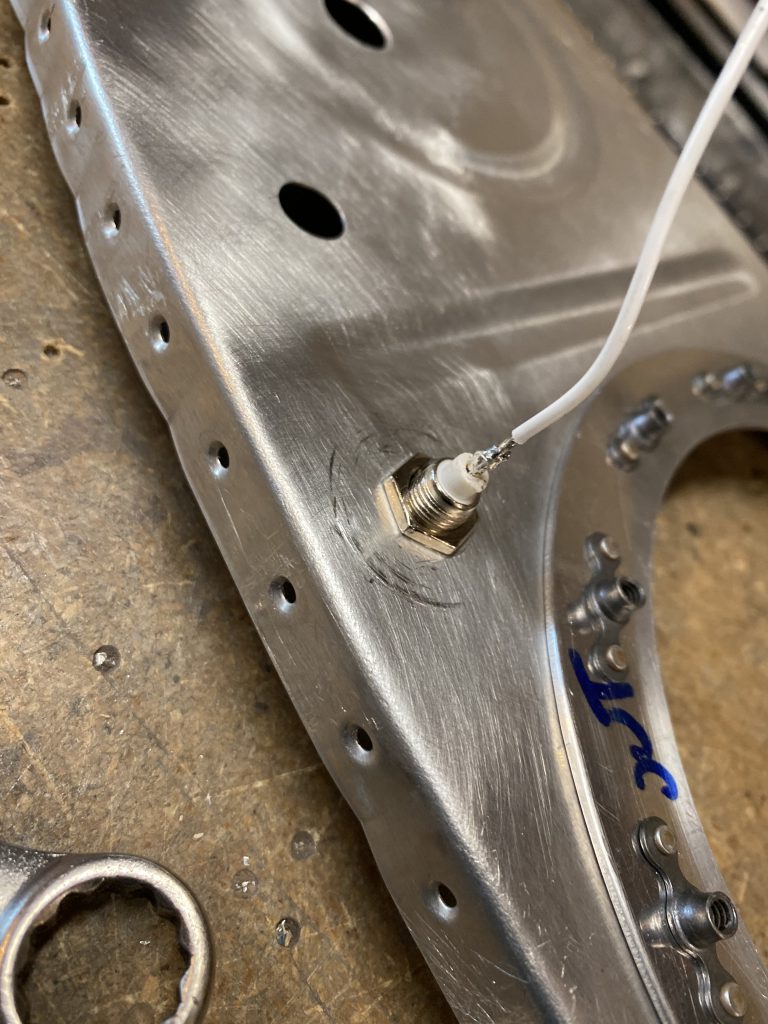 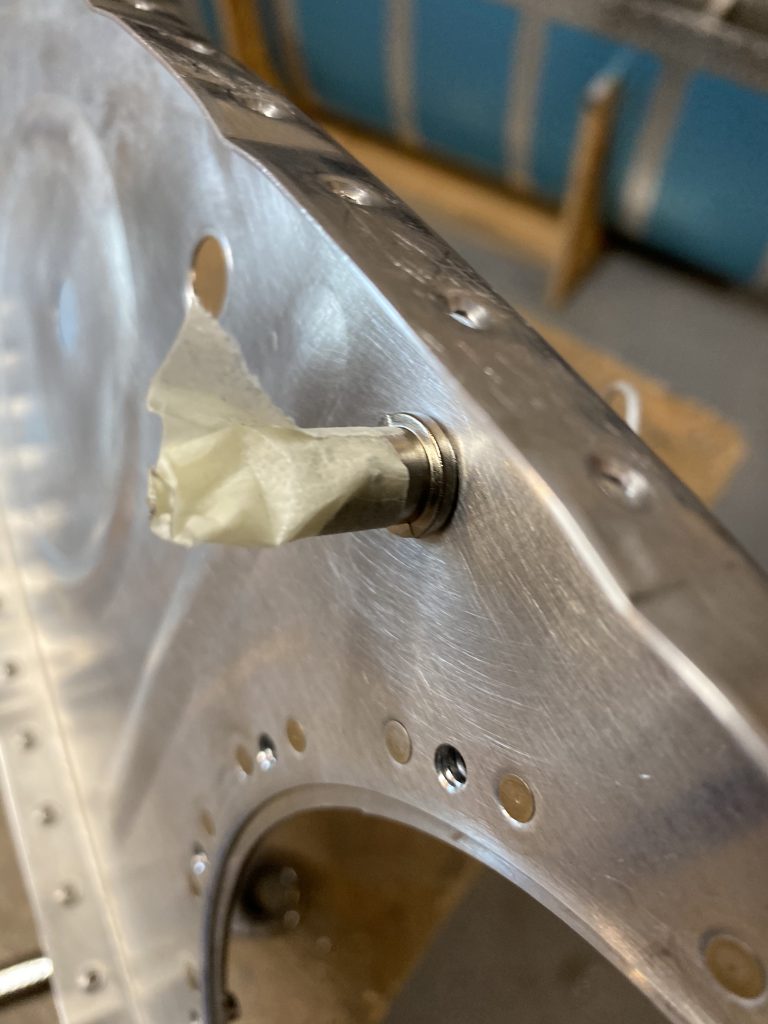 Now its time to mix up some sealant! I mixed up 30 grams, and that was about the right amount for what I needed to do.  I only had a little bit left over.  Here’s my setup, since I don’t think I have ever shown this process because I am usually gloved and messy by this time. Notice I have some scrap paper and my mixing cup and popsicle sticks on the scale and tared out.  The paper helps keep my scale from getting covered in sealant. HAH! 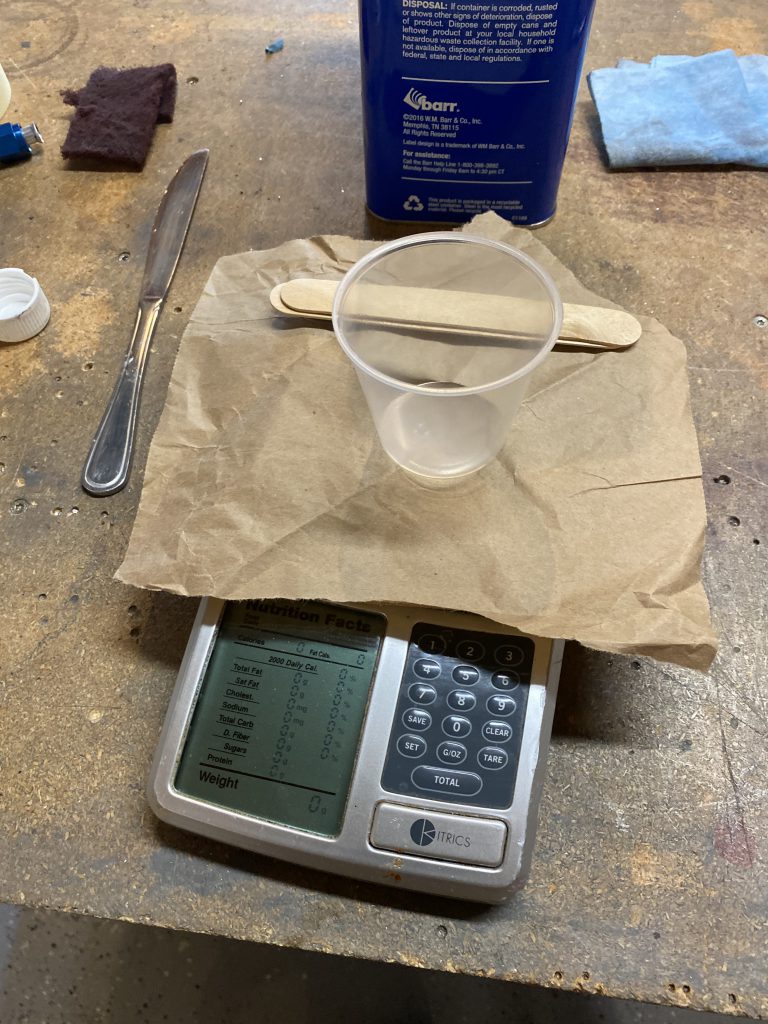 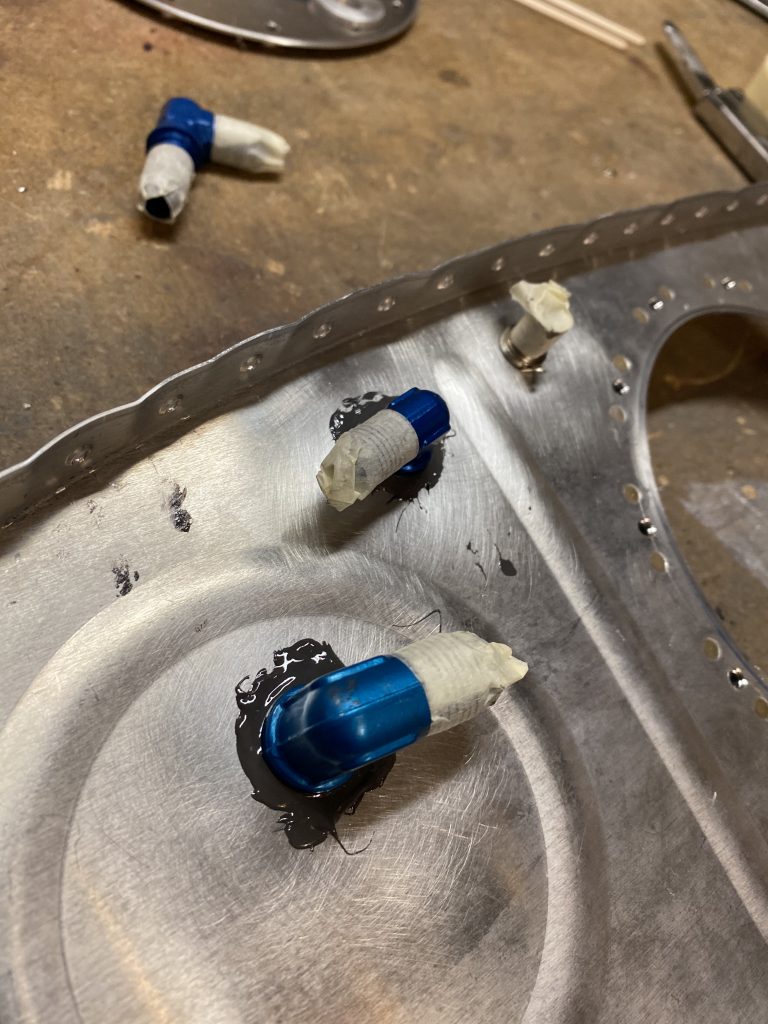 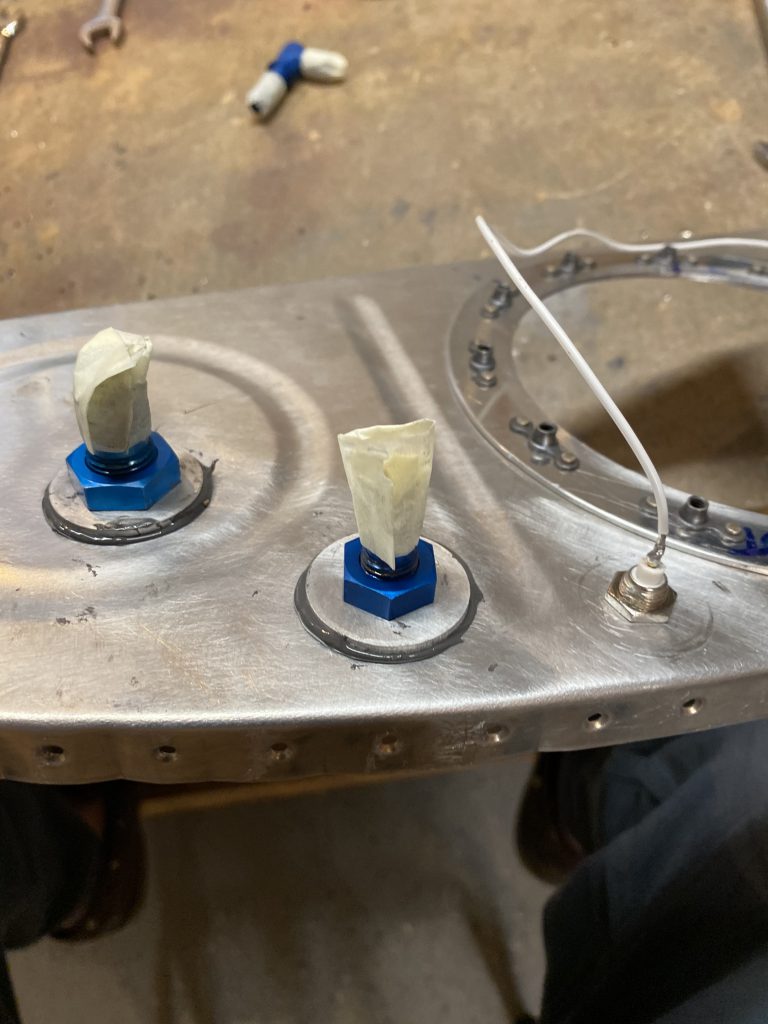 Then I use some popsicle sticks (the smaller ones seemed to work really good here) and smeared on a decent covering on the interior tank side of the fittings totally covering them from the rib, washer and nut.  The masking tape prevented sealant from fouling the threads on the fitting themselves. I made sure to get a really good blob and good coverage over the interior side of the BNC connector, also extending it up on the wire to prevent fuel from wicking into the wire itself.  On the tank exterior, I smeared some nice filets around the fitting to help get a good seal. 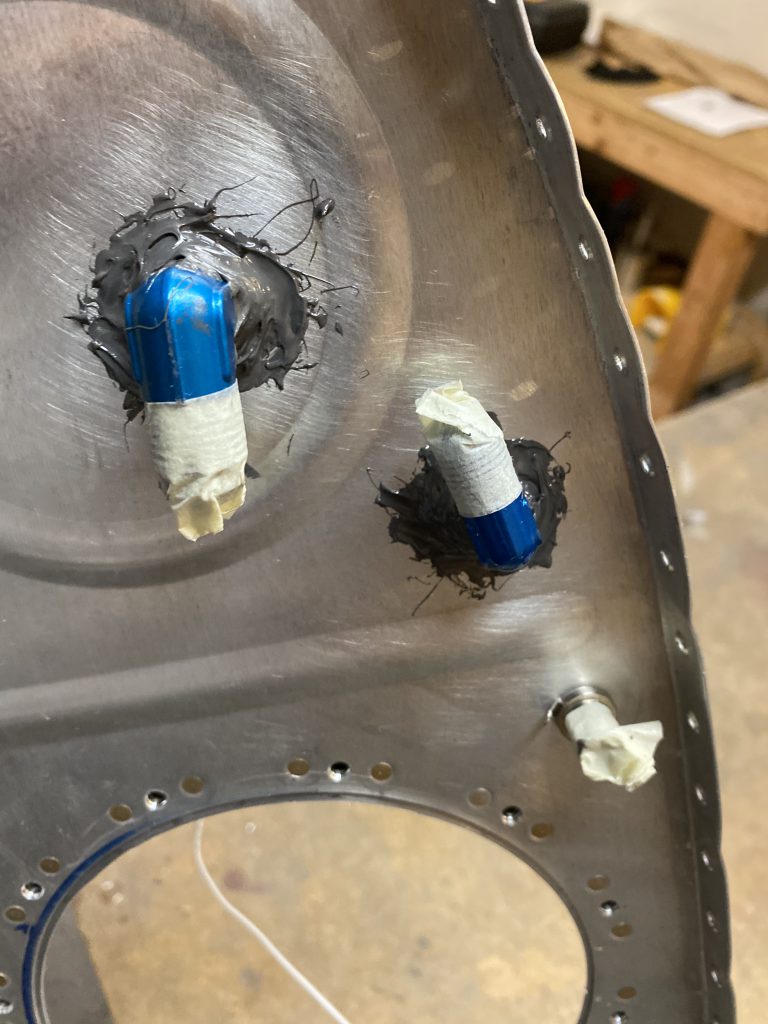 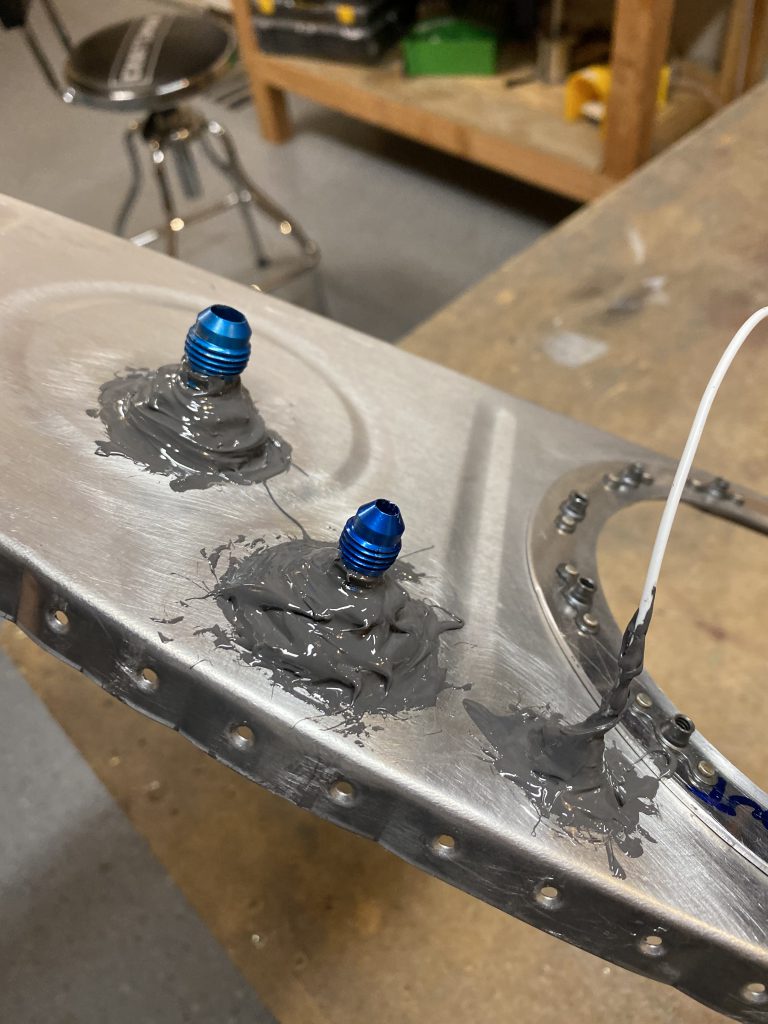 I also wanted to get the fuel pickup fitting installed and sealed, and this was a good time since I had sealant to work with.  I had already scuffed and cleaned it earlier, so I did the same here.  I did use one of the anti-rotation brackets clecoed in place just to temporarily hold the assembly clocked in the right position until I got the fitting torqued properly.  When it cures, I’ll remove the fuel pickup and anti-rotation bracket until their final assembly, once I get ready to seal this access plate on. 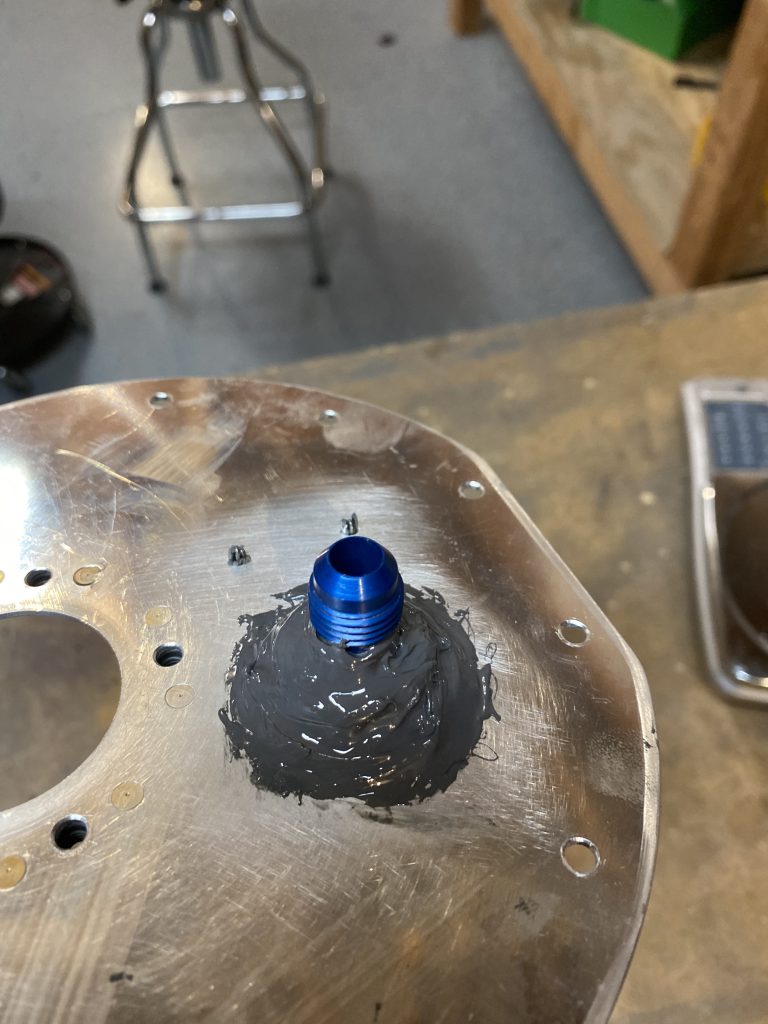 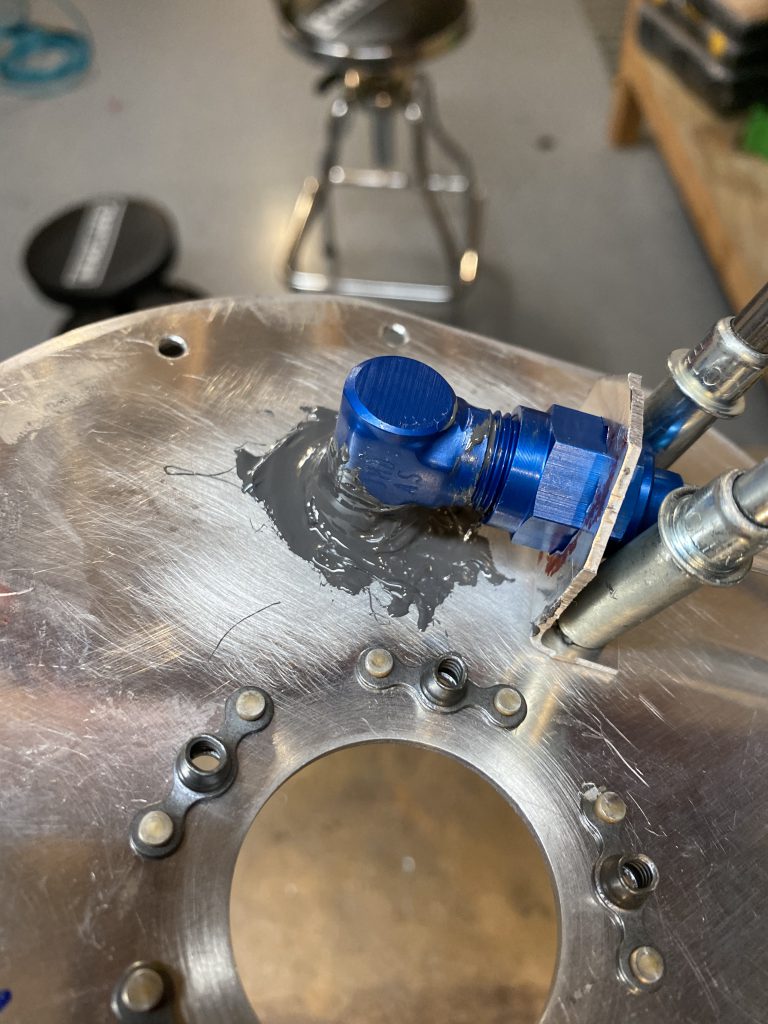 That wraps up this work session.  I’ll let these cure, and then the last rib will be ready for riveting onto the tank! Then all that will be left for this right tank is to seal the access plate, and install the baffle!  I still have the left tank to do 🙁