Good progress tonight! I wrapped up a few miscellaneous things that needed to be done before riveting the inboard outer rib. Here is the time lapse:

The first thing I did was to test fit all the accessories and fittings on the inner rib to make sure I had everything I needed in the proper places.  I also wanted to think through how I’d best complete the sealing work since there is some complex parts with the flop tube.  Ultimately, I decided I’d go ahead. and seal the fittings for the vent and tank return lines, the BNC connector for the capacitive senders, the anti-rotation bracket for the flop tube, and the anti-hangup brackets thats on the access plate. That way I could most effeciently use my sealant, and leave the other items (all the stuff at the nose of the rib) for when I am ready to rivet them in place. 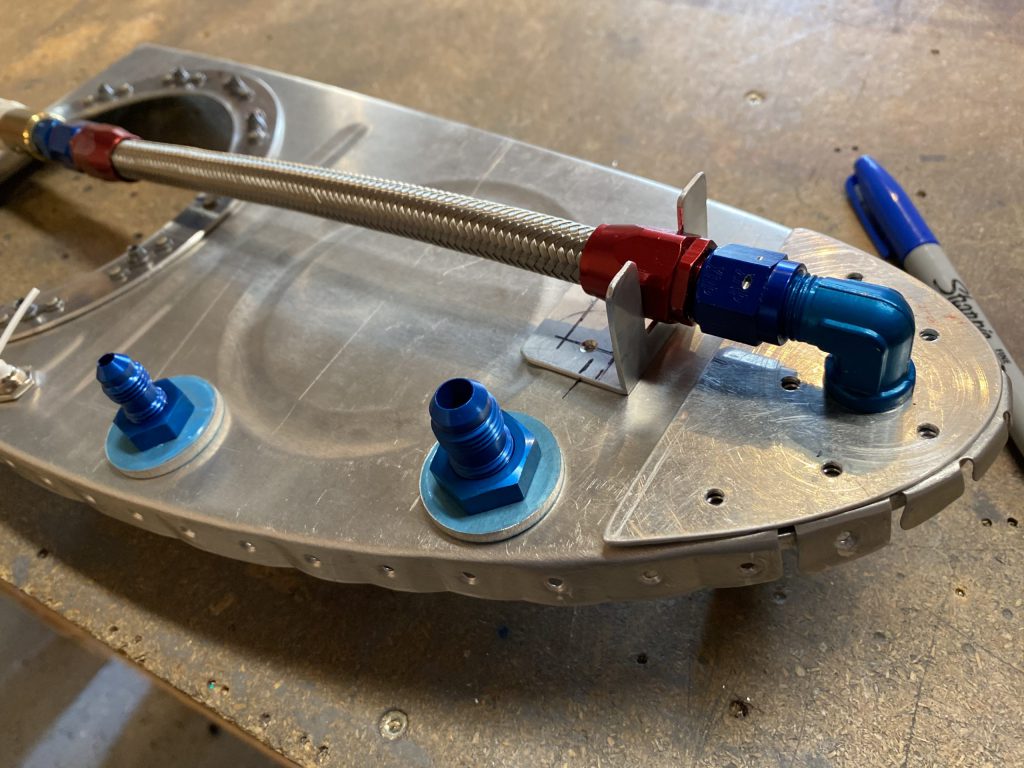 Next, I scuffed all the pieces that were getting sealant tonight, and cleaned everything nice and well with MEK.  Then got my parts and work area organized to start the sealant work. Once thing I needed to go ahead and do, was to torque the flop tube down to its elbow fitting, safety wire it and make sure the nut shoulders fit into the anti-rotation bracket.  This is my first time safety wiring, but I watched some videos and read a little.  I think it turned out pretty nice for a first timer…….if you don’t count all the scrap from the other dozen times it didn’t turn out nice!!! HA. 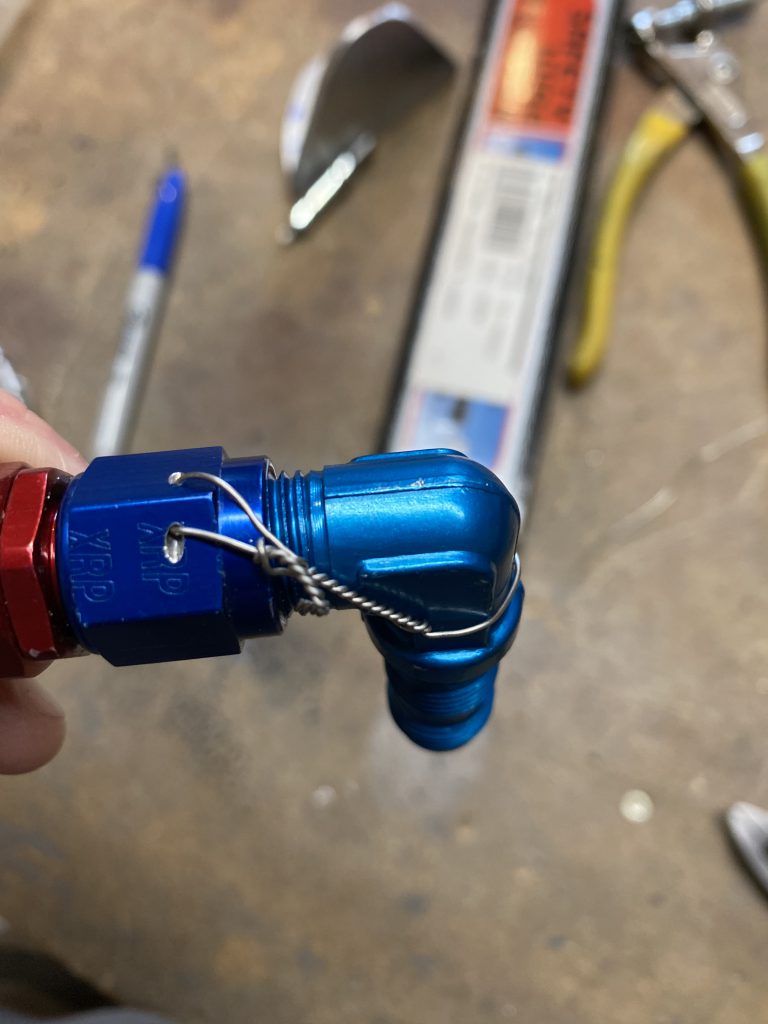 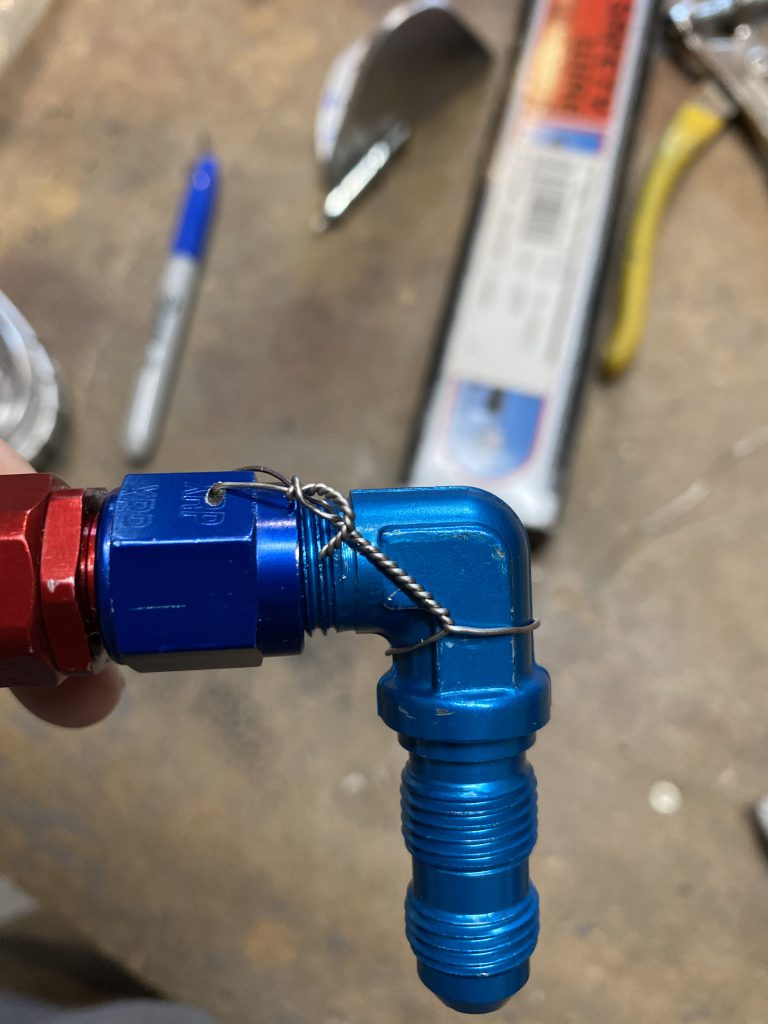 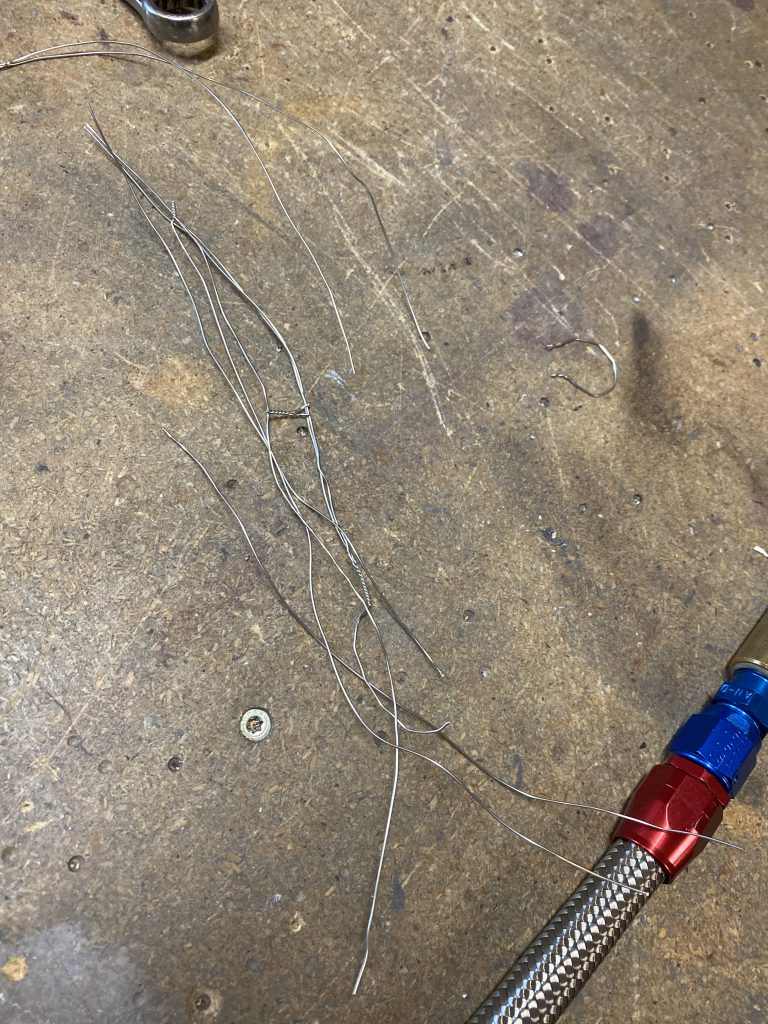 It’s orientation is such that the safety wire is actually pulling the nut tighter on its threads. You have to really be careful you don’t have the safety wire pulling on the nut and rotating it LOOSE.  Anyways, that was a fun experiment. Now its time to seal! I mixed up 20 grams for this session, which was about 5 grams too much.  Close enough I guess.  Here is the list of parts I will be sealing.  Notice I went ahead and screwed the wire terminal on the capacitive sender plate.  I need to cover it in sealant per the directions to keep it from vibrating loose. 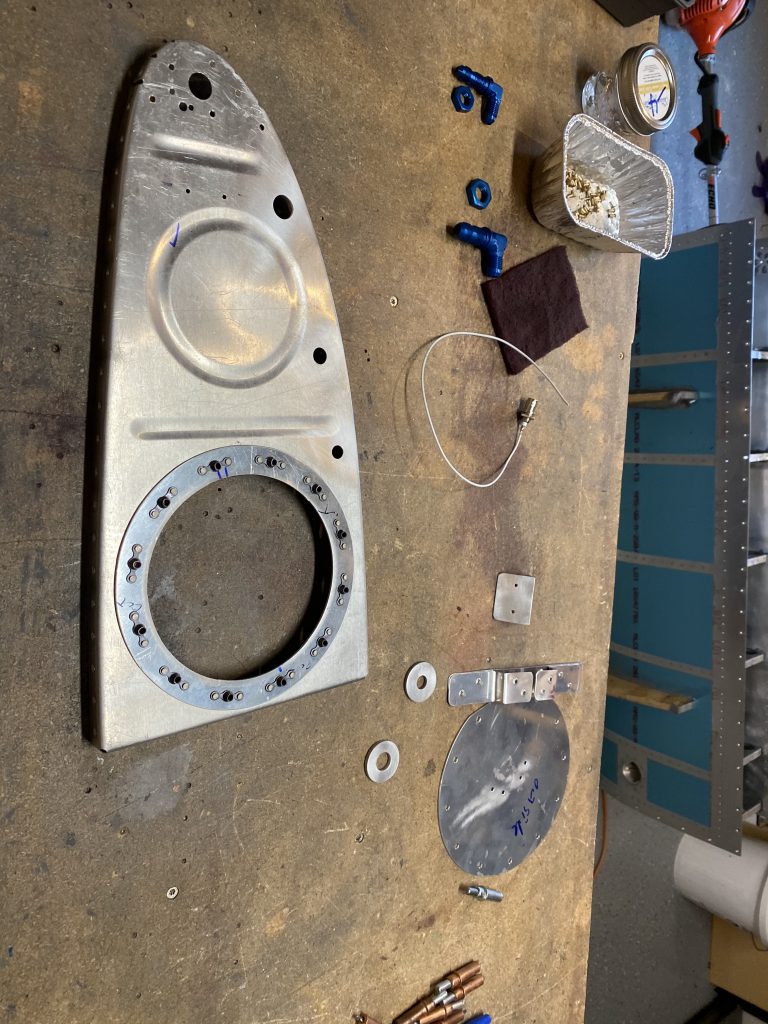 I started out by fixing the anti-rotation bracket.  I smoothed on a small amount of sealant around the rivet holes, and then clecoed it in place, and squeezed the rivets for it.  I had to use my rivet gauge to find the rivets I needed, since this is sort of a “custom” part.  I also cleaned them in MEK to remove any manufacturing oils on them. After that was done, I grabbed the access plate and covered it in sealant, clecoed on the anti-hangup bracket and riveted it in place with the squeezer as well.  Then I smeared some sealant onto the shop and tails of the rivets, and put it on the shelf to cure. 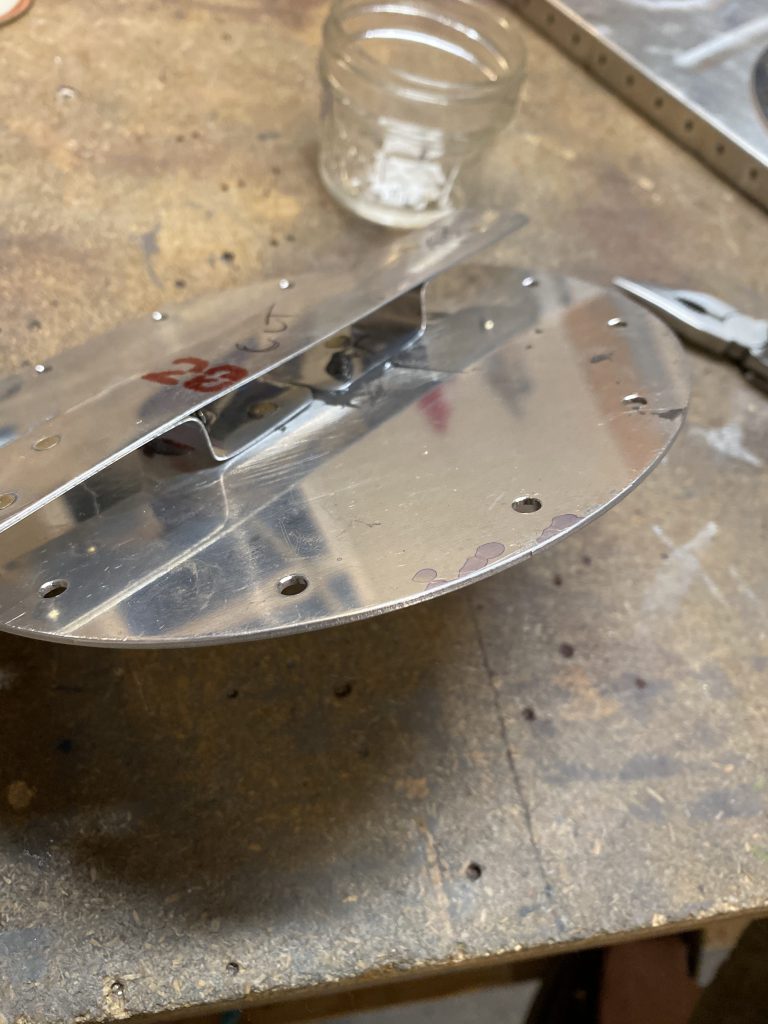 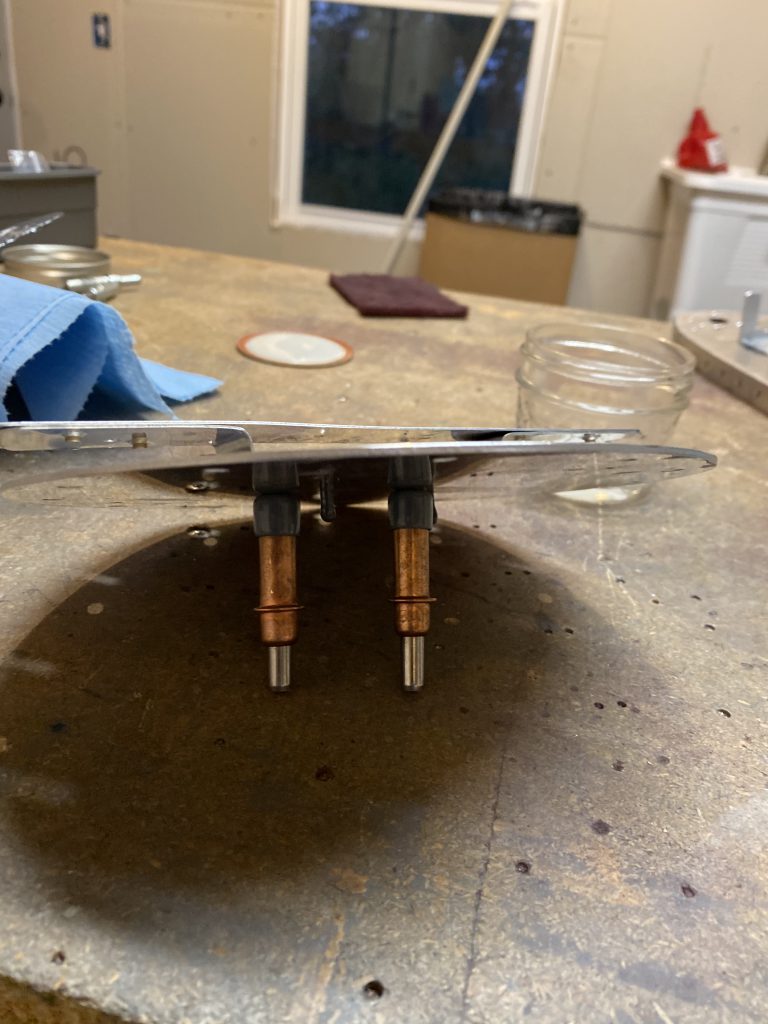 Next up was to slather on the sealant into the terminal connector for the capacitive sender plate.  I covered both sides of the bolt and nut, and completely covered the terminal connection and squished sealant down inside the terminal boot and smeared it up the wire a bit to act as a strain relief.  I had already torqued this connection down in an earlier build session. 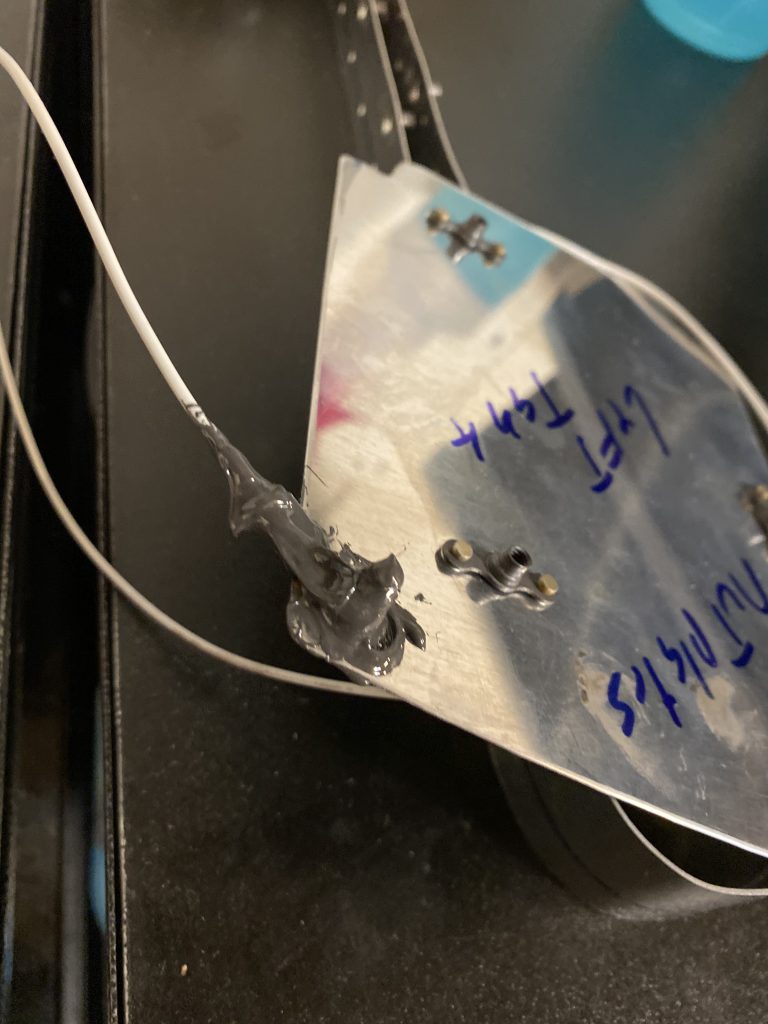 Next up was to torque down the fittings for the tank vent and fuel return lines.  I slathered one side of the washers in sealant, placed it on the rib, and then slide the fitting into place, clocking it to the position I wanted on the outside of the tank. Then torqued it down.  I did this for both fittings, and got a decent amount of squish-out of sealant for a nice filet. 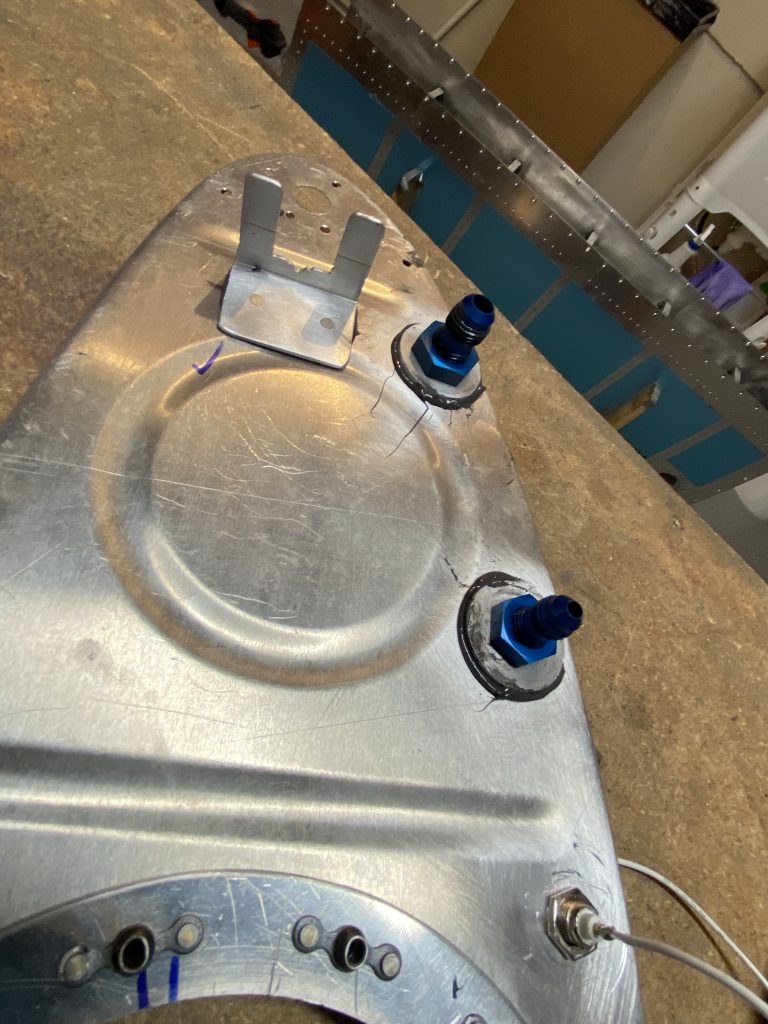 Now I’m in the hose stretch with the sealing! I gooped up the inside poriton of the fittings with a nice coating of sealant (after cleaning and masking the threads of course), making sure to get a nice filet around all the mating surfaces, and covering all bits nicely.  I also completely covered the back side of the BNC connector and went up the wire a decent bit to act as a strain relief.  I also dolloped on a little bit of sealant on the heads of the rivets holding the anti-rotation bracket in place. After getting the inside done, I made nice filets on the outside of the fittings to completely (hopefully) seal them.  I set this rib on the shelf to cure. 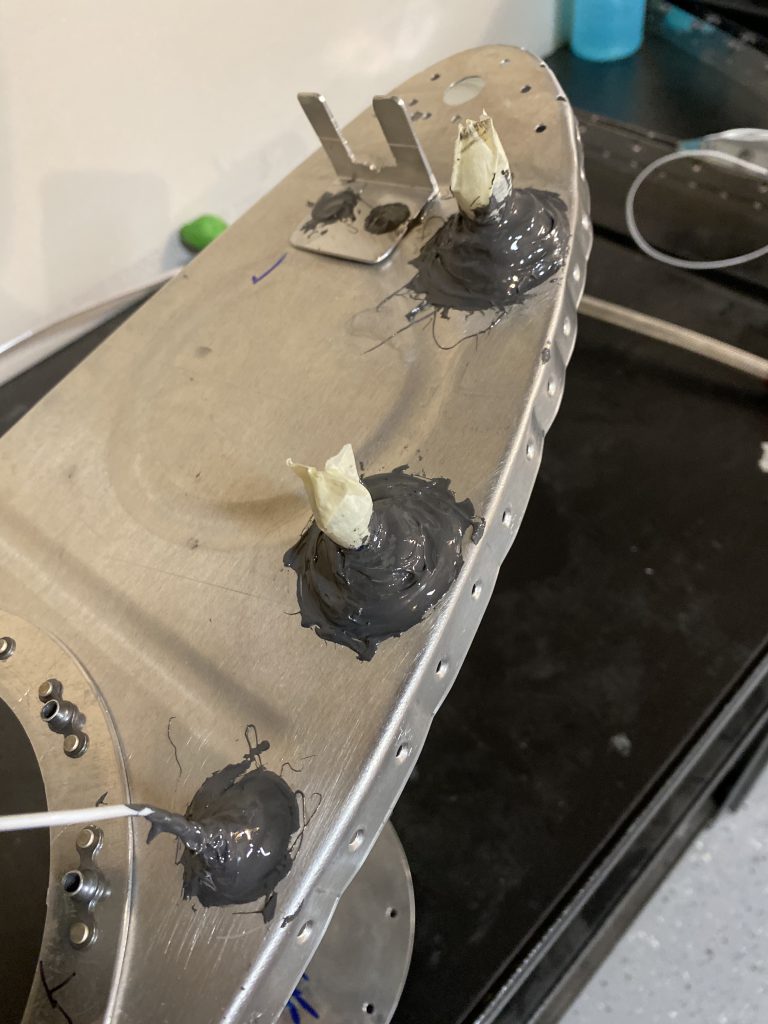 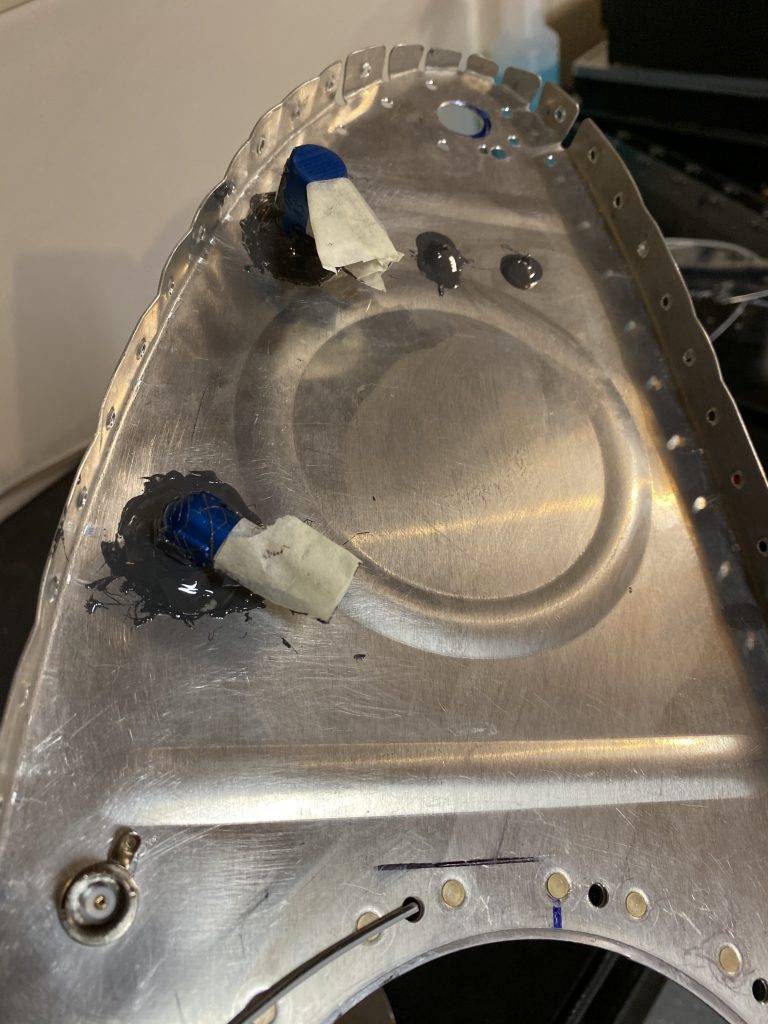 I still had a little more work to do.  I needed to rivet the anti-hangup bracket that goes from the stiffener up to the inside rib and install the little trap door.  Easy enough to do, and required no sealant.  I did use a rivet gun to buck these two little rivets holding the anti-hangup bracket.  I decided to re-drill the hole on the rib, as its a little to close to the hole for the screw that holds the capacitive sender on the other side of the rib.  You can see the unused hole directly below the now riveted bracket. 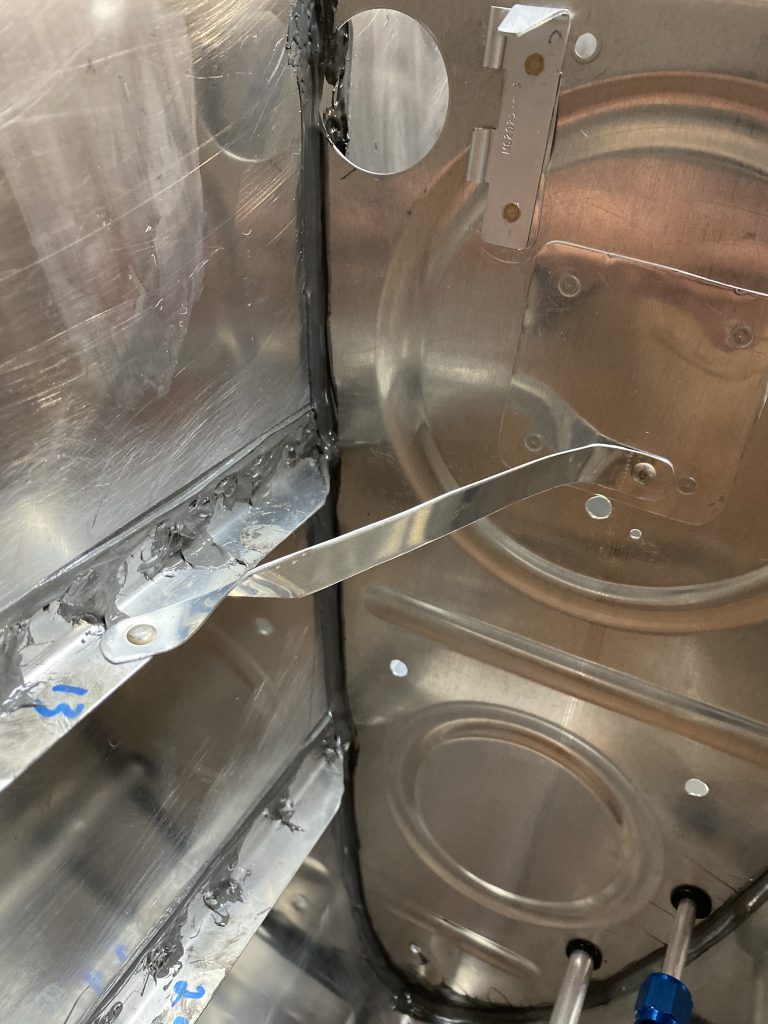 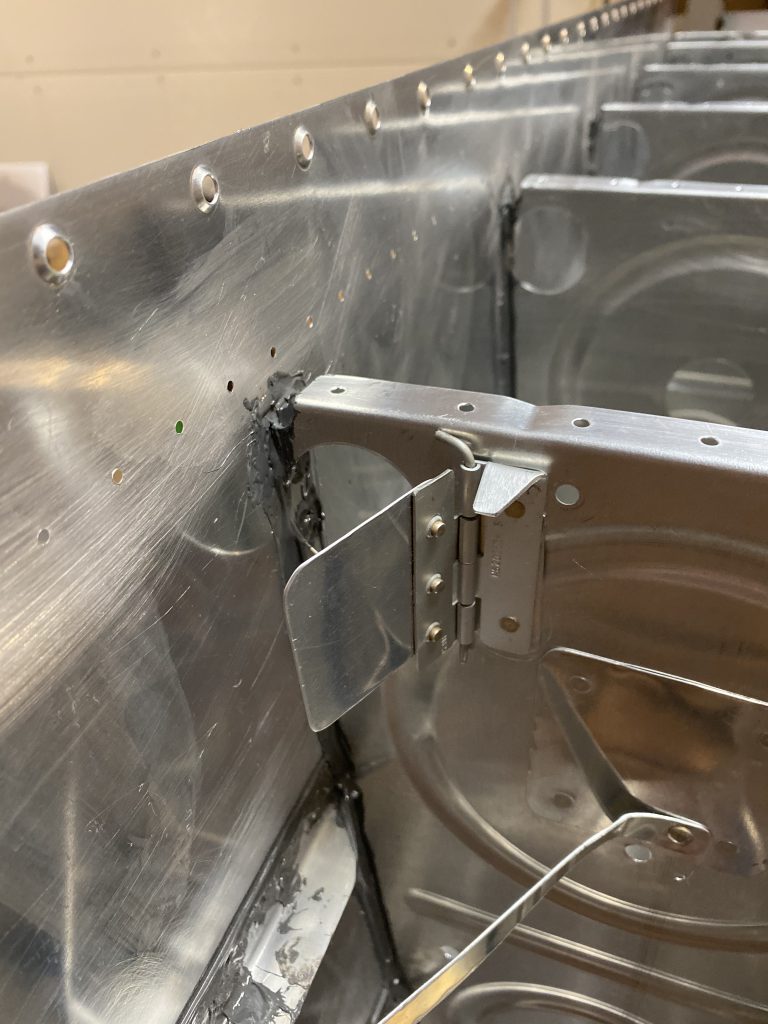 Lastly, I decided to go ahead and install the capacitive sender plate on the outboard side, yes the one I just slathered sealant on.  This was probably a bad idea, as I did get a little messy from the wet sealant. HA.  But its installed and ready to connect to the inboard sender when that time comes, probably next build session. 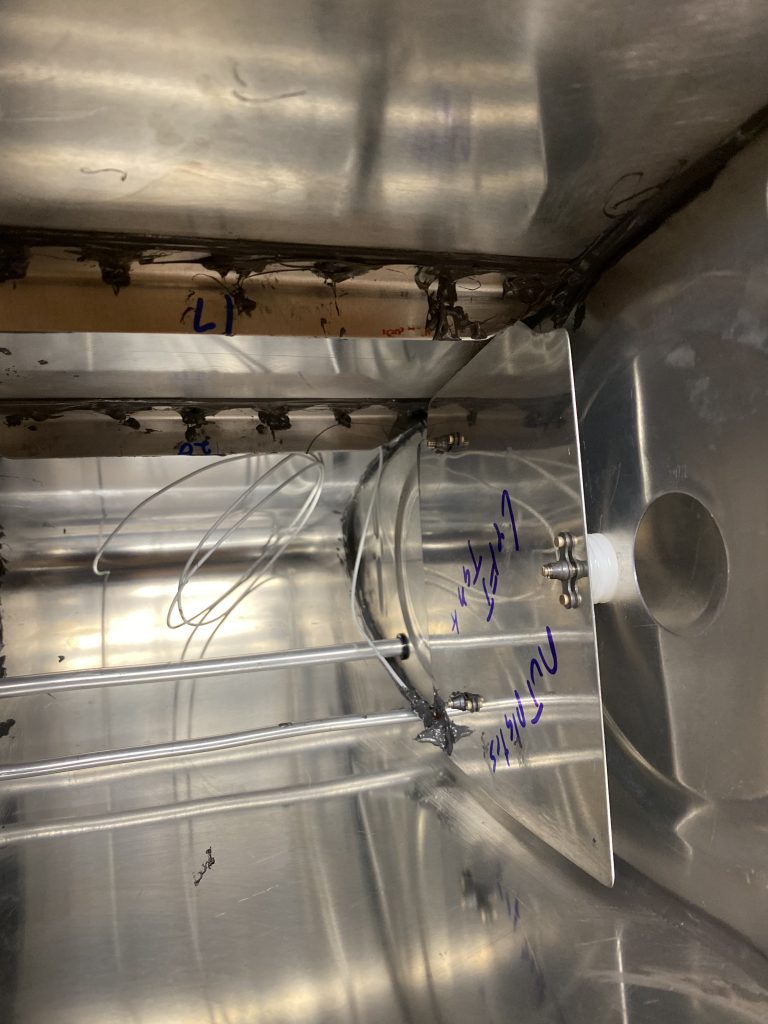 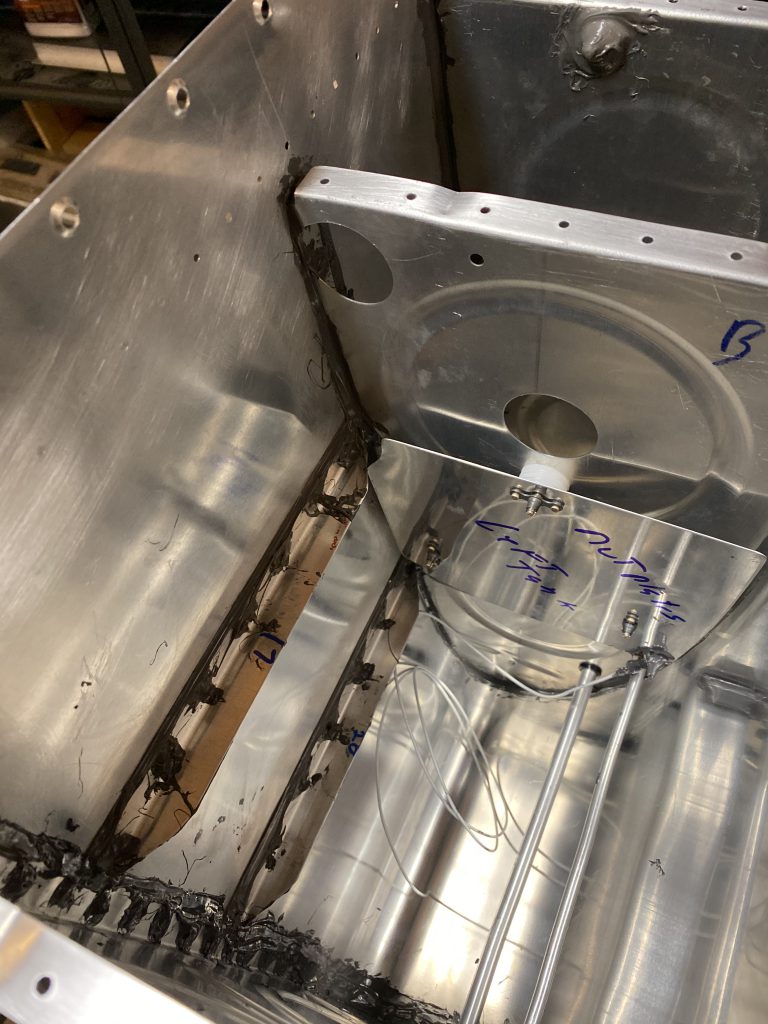 And that’s a good stopping place for tonight.  I am ready to seal and rivet the inboard outer rib once it cures from this work tonight.  From there its a water test for leaks and then final sealing of the baffle! Its getting very close to being done with these tanks! W00hoo!