We’re getting close to having a completed aileron! I was able to fully complete the assembly and drilling of the left aileron tonight, and its parts are now ready for deburring, edge finishing, and priming. I will hold off on that until I have the right aileron done and do the all the parts in one big batch. For tonight, I started off by clecoing the A-802PP leading edge skin and the A-801-PP trailing edge skins to the spar and then clecoing the A-705-R/L end ribs into the trailing edge skin.  Once I had that done, I inserted the 1/2″ galavanized water pipe (A-409) into the leading edge skin, and then clecoed the A-704-L/R nose ribs into place to help hold the A-409 counterbalance. Once I had every thing assembled, I double checked for alignment. 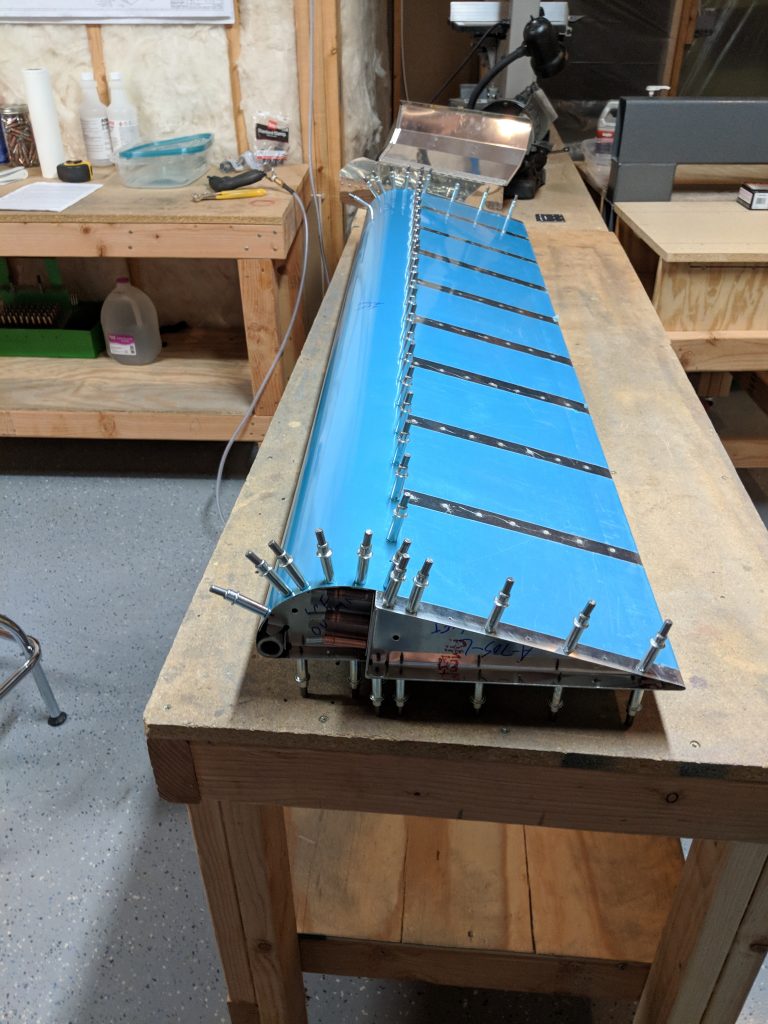 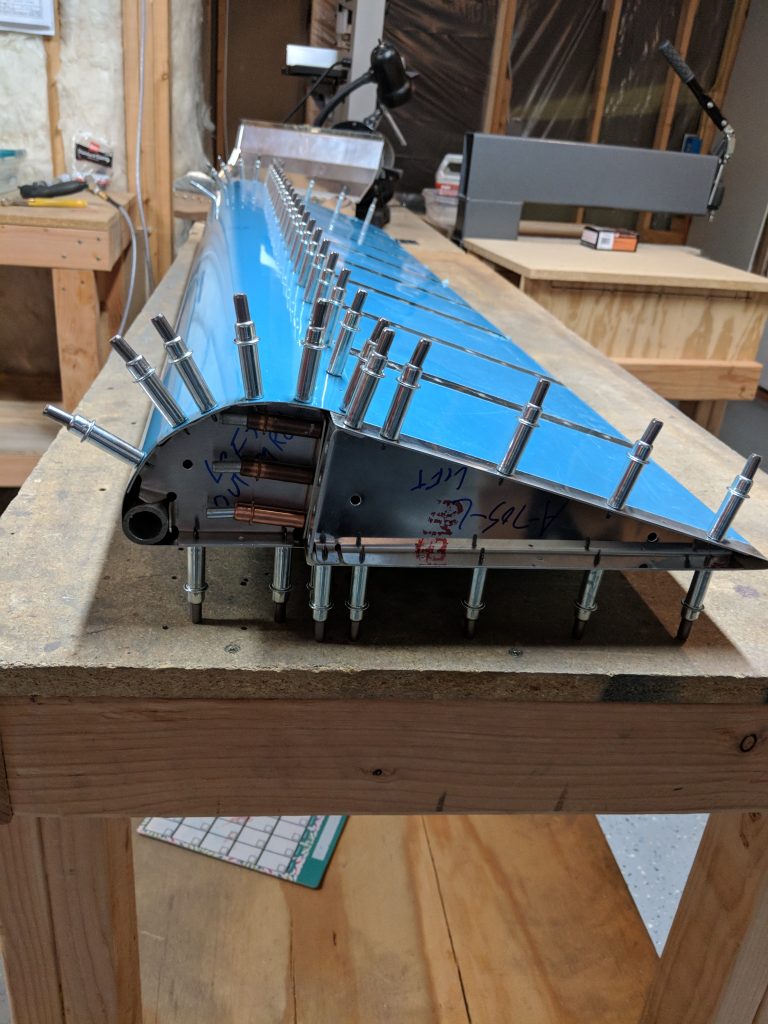 I will admit, I have to admire the utility of using a plain old piece of galvanized 1/2″ water pipe as a counterbalance.  It’s simple, robust, and cheap, all principles that Van’s uses in their “Total Performance” moniker. Thankfully, Van’s ships this pipe in the wing kit, and its precut to length!  Once I had made sure everything was still in alignment, I went ahead and match drilled everything to their respective hole sizes.  The normal process is I cleco every other hole, and then match drill the empty holes to their correct size, then move the clecos over by one hole and drill the rest of the holes. I like to use a lot of clecos on the ends to help hold everything secure, so I have to make sure I remove them, drill and then replace them afterwards.  I am also going to use a edge roller / former to break the edge of the leading edge skins before I dimple.  This will give the skins a nice flat joint when I rivet them. 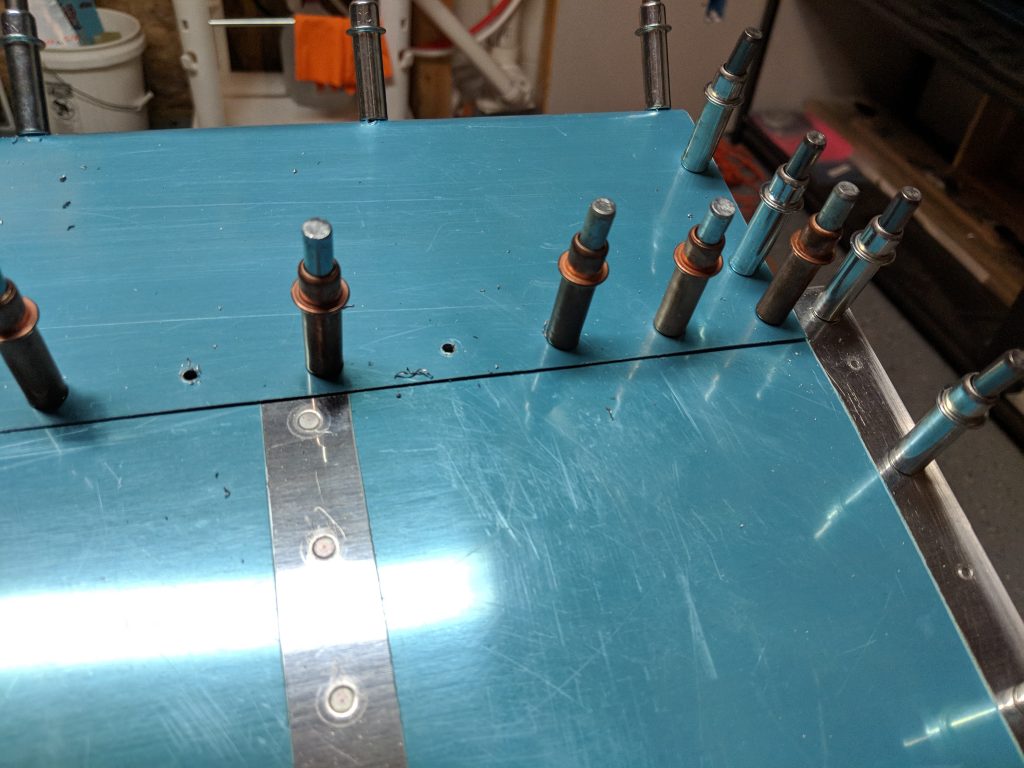 Along the bottom of the aileron, where the leading edge skin and trailing edge skins overlap one another on top of the spar, I drilled the holes for a #30, as called for in the plans to fir the CS4-4 blind rivet.  Next up was to drill the holes into the A-409 counterbalance / water pipe using the pre-punched holes in the skin as a guide.  HERE’S where I think I may have messed up.  Take a look at the photo below: 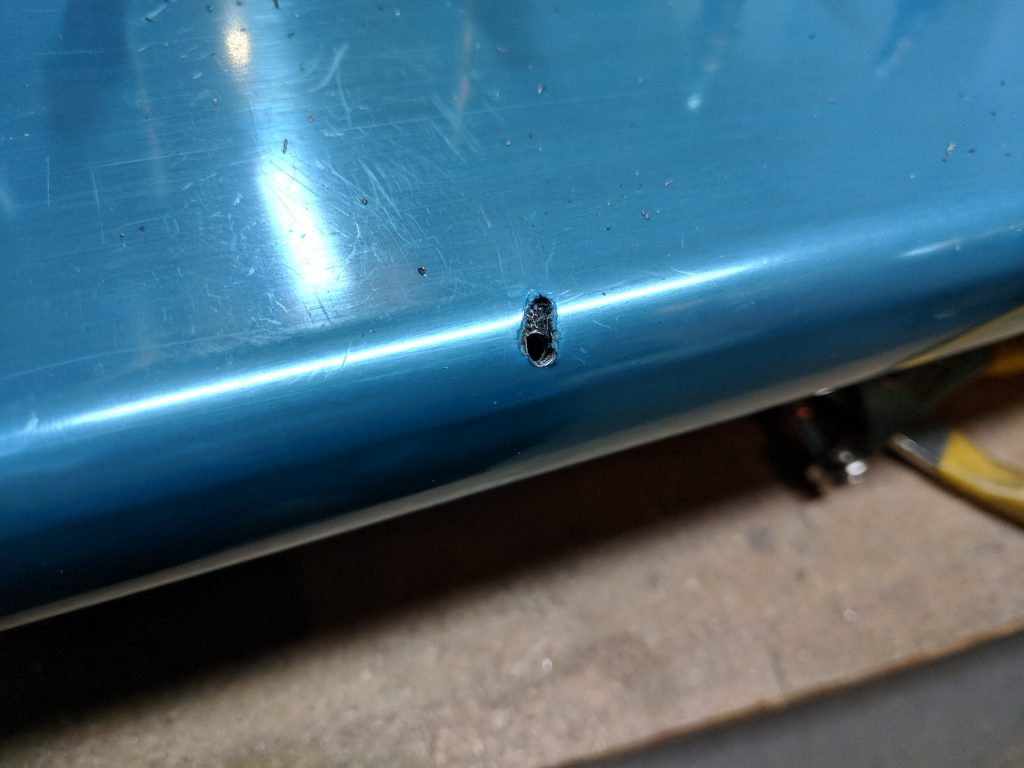 Do you see that ugly oblong hole in the skin?  This is the first time I drilled this counterbalance, and somehow my drill walked and chewed away at my skin before it made a pilot hole in the counterbalance beneath. It’s zoomed in in that photo, so it looks bad, heres a ruler for scale: 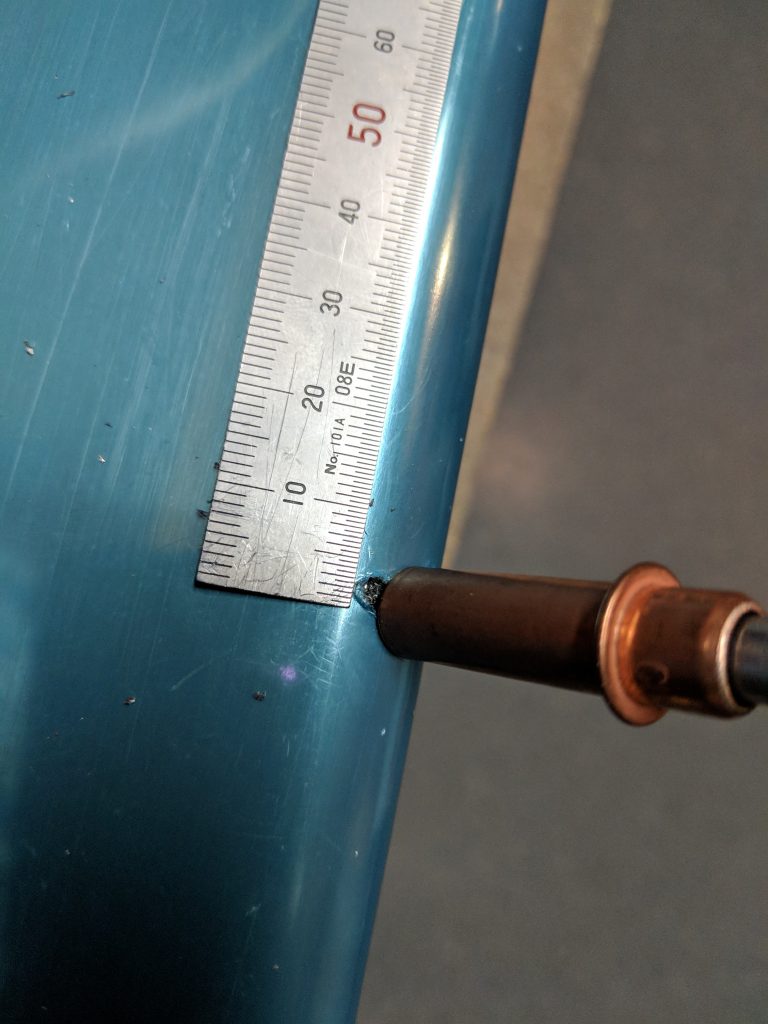 However, with this new found knowledge, I decided that the best course of action was to step my drill down to a #40 first, drill the holes and then move up to a #30 and enlarge the hole to its final size.  Which worked out wonderfully on all the rest of the holes in the counterbalance. BUT, I am concerned about this.  I’m going to give Van’s a call in the morning and send them the photos to get their opinion on it.  Worst case scenario is I have to buy a new leading edge skin and A-409 water pipe, best case is that they tell me to use a bigger hole and rivet (which would be super easy to do).  I’ll update this post when I find something out.

Any ways, carrying on, I decided to drill the last holes in the counterbalance just in case.  The plans has us remove the trailing edge skins, and re-cleco the leading edge back onto the spar for alignment, and then use a long 1/8″ drill bit to get to the last two holes we need to drill.  We go into one of the existing holes for the A-704 nose ribs on the bottom and then drill the hole into the counterbalance using the hole in the flange as a guide.  Like this: 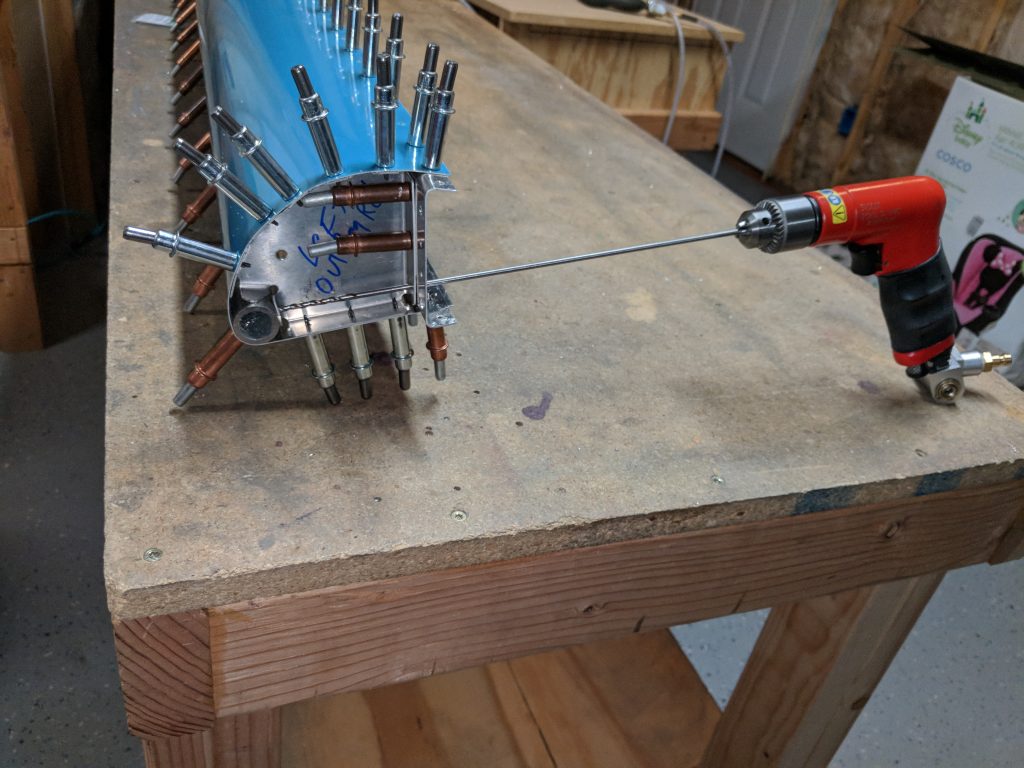 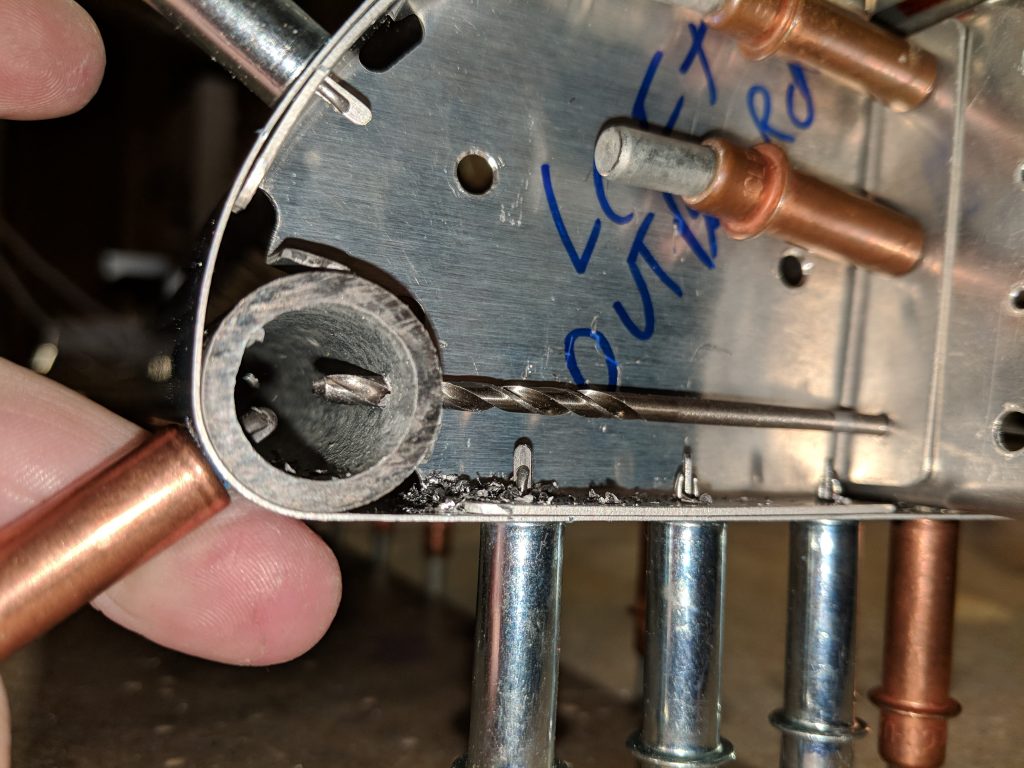 That worked out really well, and the last two holes were drilled into the counterbalance via the nose ribs. For here, I disassembled everything, and put the parts on the shelf until I get time to deburr, finish the edges and clean them up for priming.  Thats it for tonights session, I will do the right aileron in the same fashion tomorrow. Hopefully after I speak with Van’s I’ll get good news that my mess-up is fixable.  I am just glad that it happened on a part thats relatively easy to replace if need be! Especially since I haven’t spent the man hours prepping and priming it yet!  Heres all the photos from tonight: