Time to admit a mistake I realized early today:  I forgot to connect the fuel sender wire on the left tank (rear baffle) before I bolted it down! Not a big deal, as I only used a few screws to hold it, and I can easily unscrew and unbolt it to fix.  If it was rivets, this would be a lot more work!  So I started out by removing the left fuel tank, and I was going to make up a short piece of wire for the connector, but I soon realized I didn’t have the right size terminal connection to make a good fit.  So, I will hold off on the left tank until I order some terminals.  I did make up a short pig tail that I will use to make the tank serviceable.  This little pigtail will attach to the fuel sender with a ring terminal, and then go through an existing hole in the main spar web so that it can be easily disconnected if I ever need to service the tank later on. 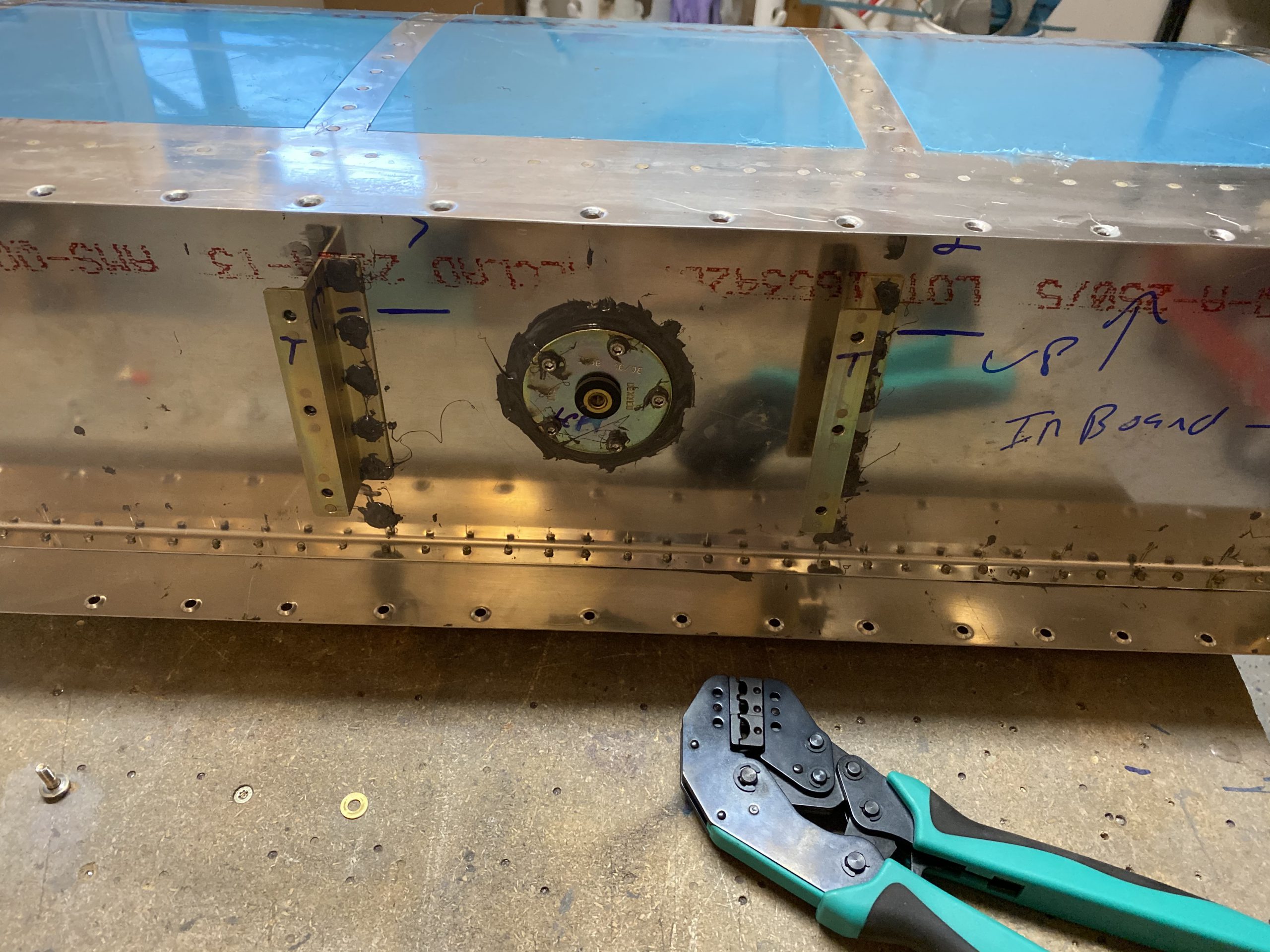 I’ll give more detail on that when I get some ring terminals and mount the fuel tank on perminantely.  In this process I also noticed another mistake:  I forgot to set the flush rivets that are underneath the tank skin, h0lding the forward hole of the main wing ribs!  Thank goodness I caught this now!  I went ahead and squeezed those few rivets while I was here.  Took about 10 minutes. 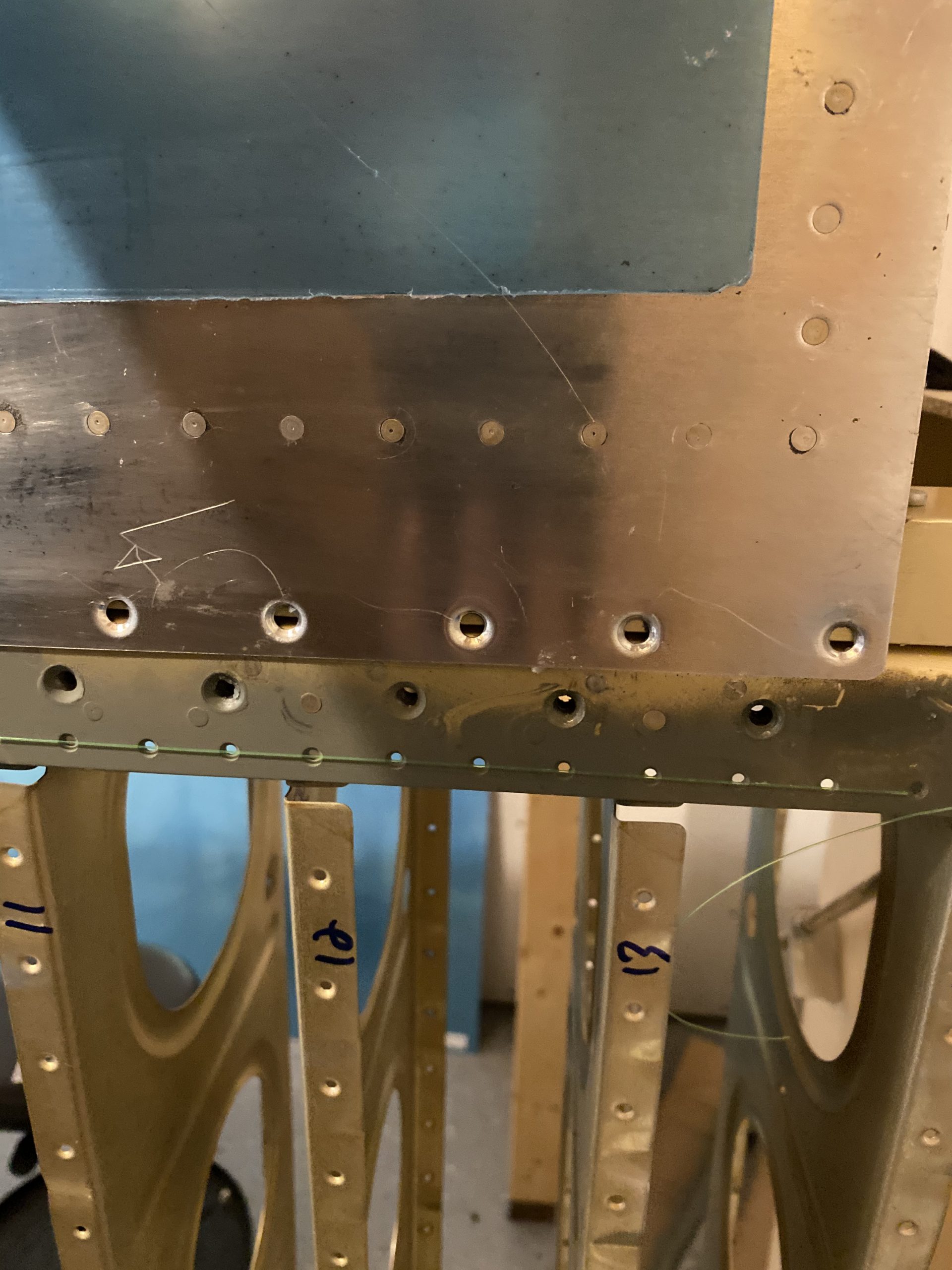 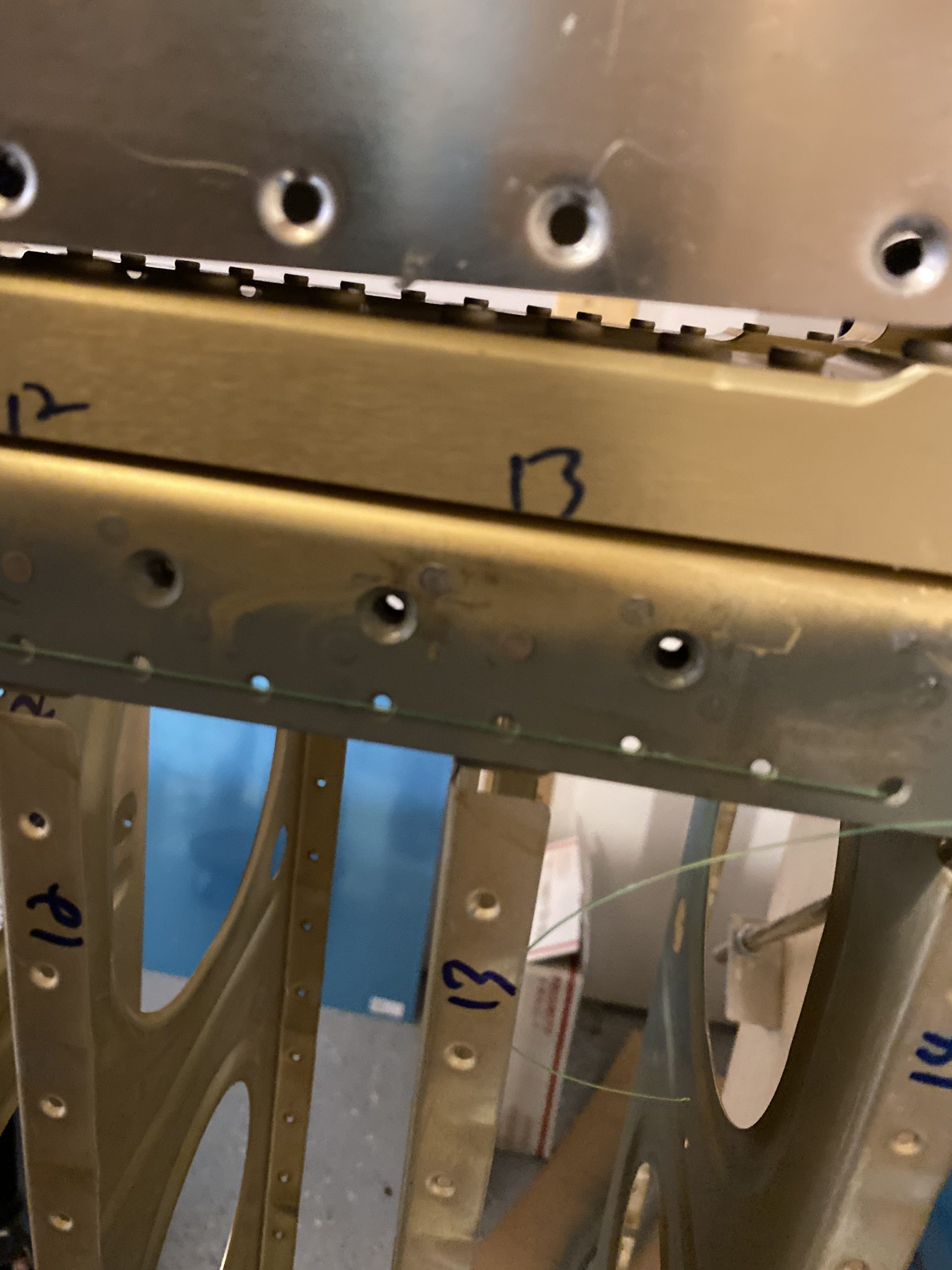 Then I moved on to getting the right wing ready for the work to get it caught up with the left wing.  I pulled off all the right wing skins and set them aside for finishing.  Then I grabbed all the parts from the paint booth for the leading edge and wiped down the overspray dust with a rag.  Then I put the skin in the cradle so I could get the ribs clecoed. 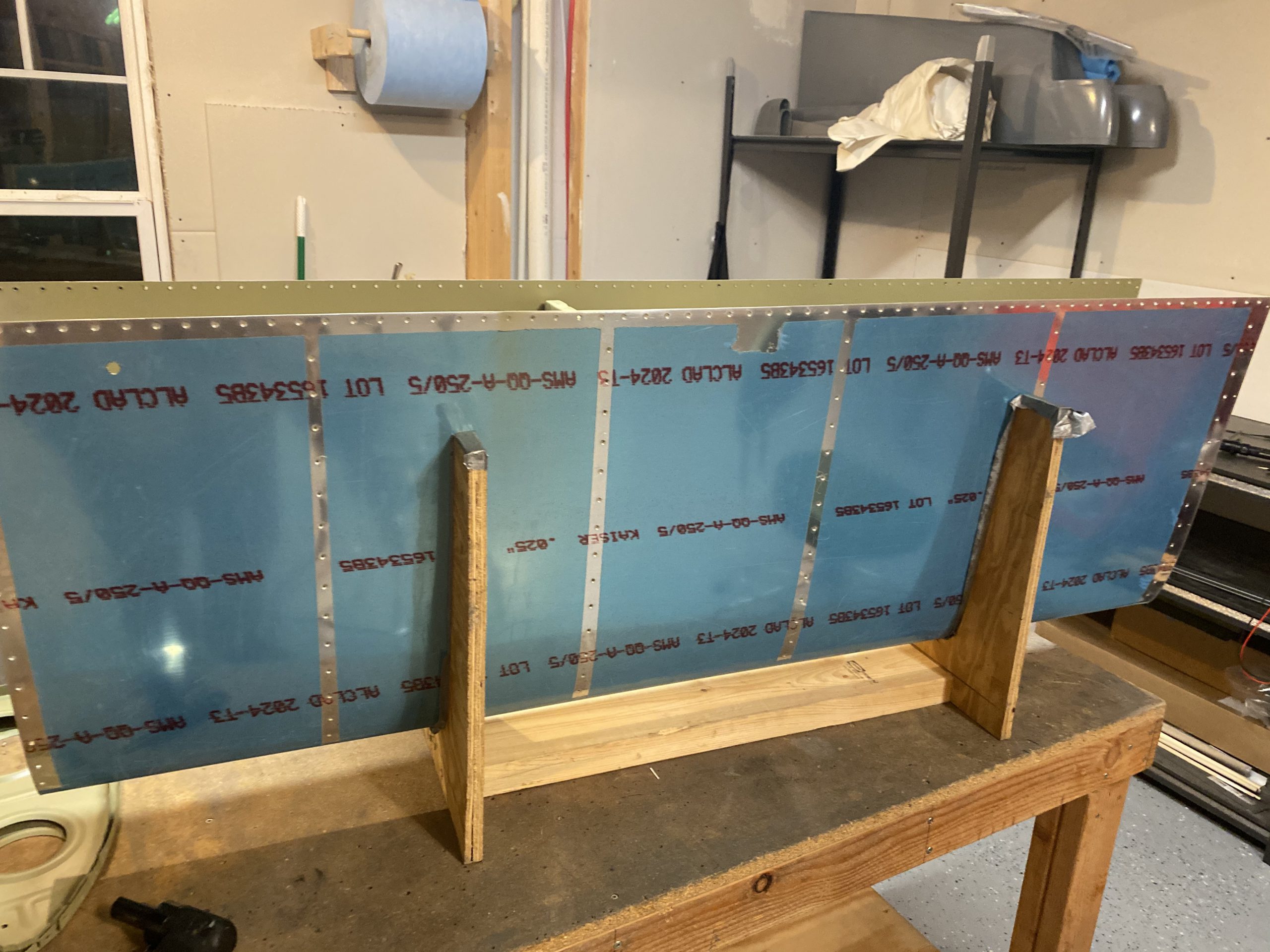 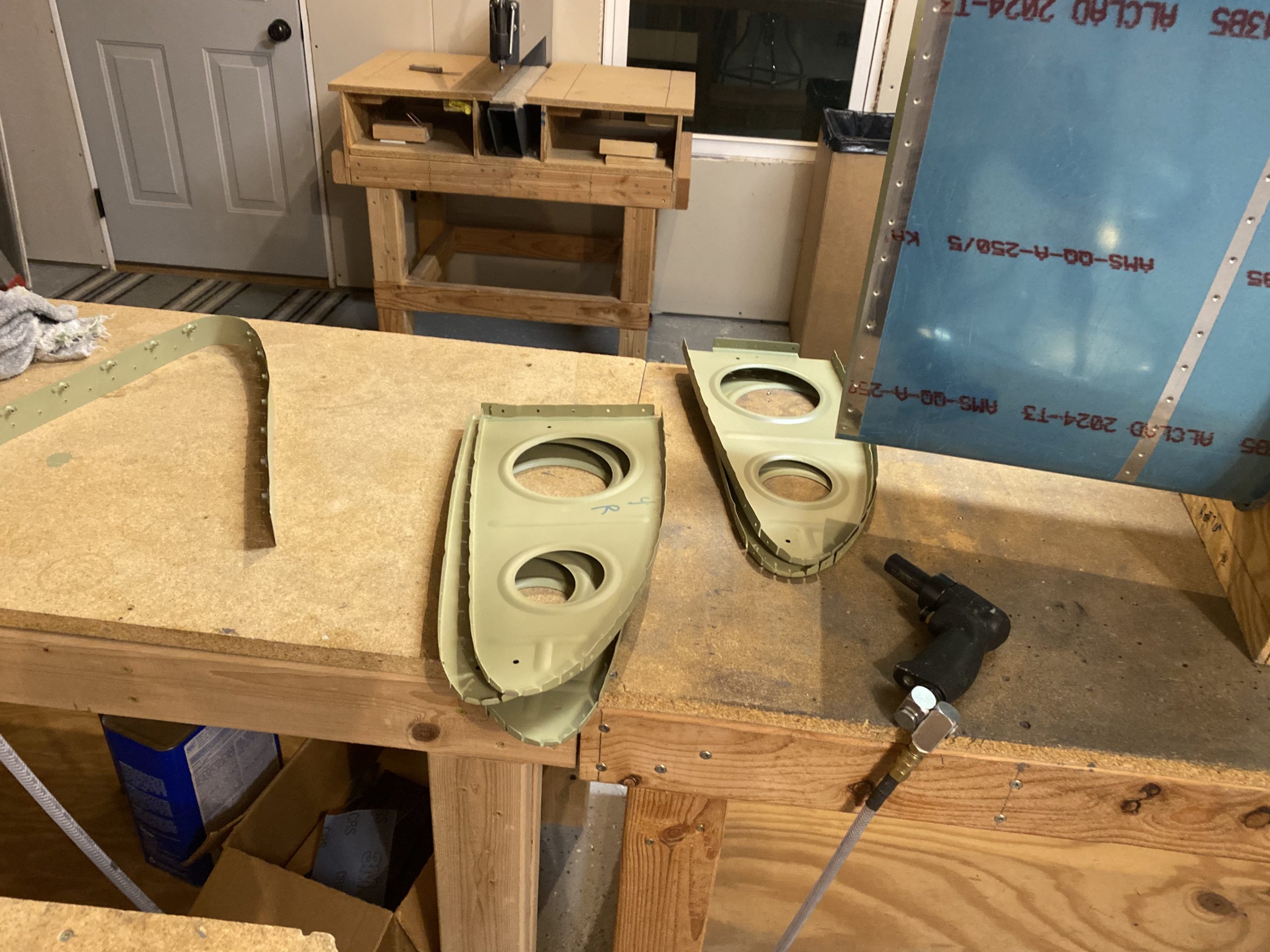 I clecoed the ribs into place making sure I got them in the right spots, thanks to numbering them before priming.  Once I had all the ribs in place, I set the leading edge onto the wing main spar to make sure everything was lined up nicely. 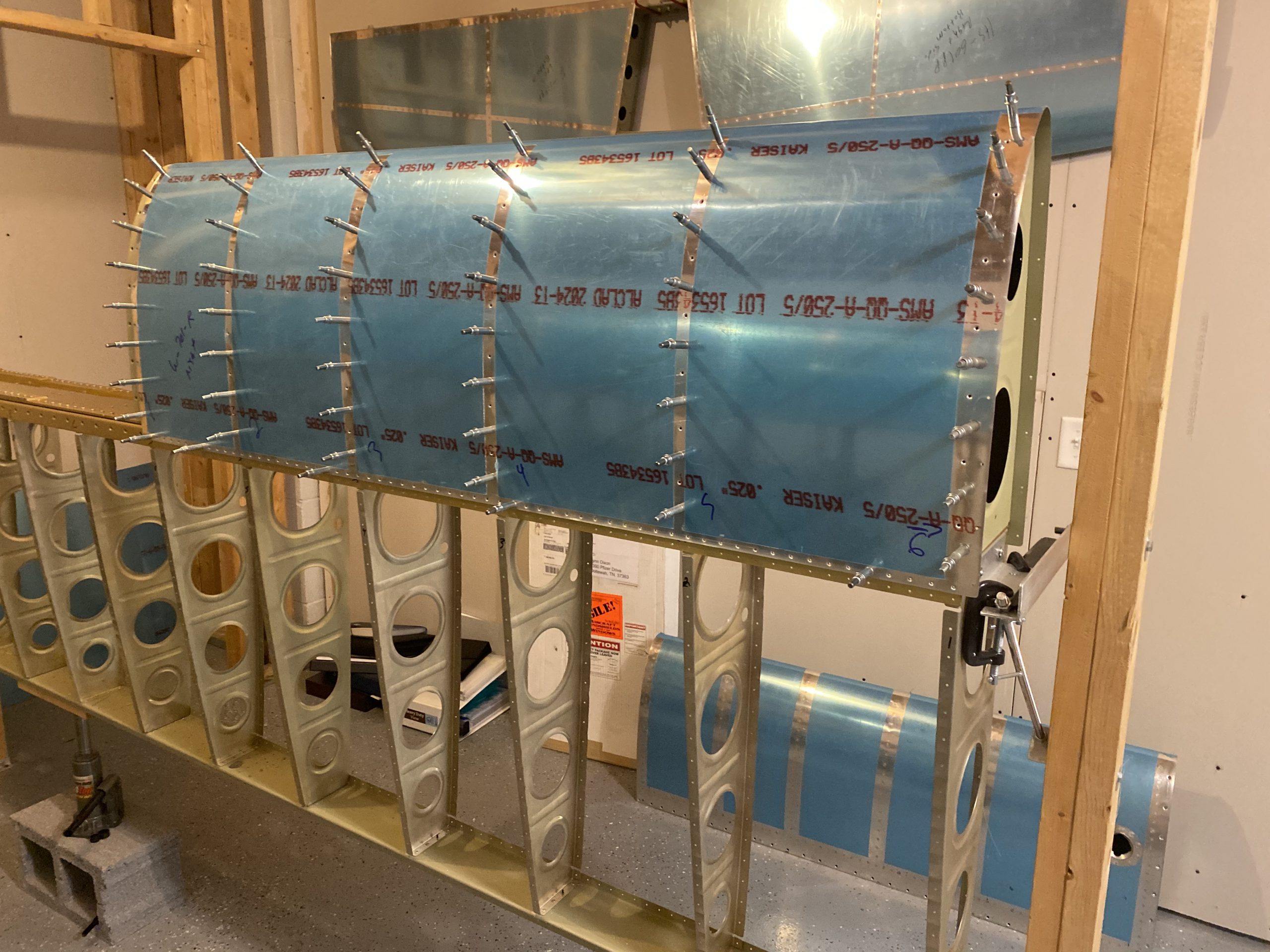 Then the leading edge went back into the cradle so that I can start riveting on it.  That may be tomorrows work session. That or I’ll countersink all the holes and dimple the ribs for the right wing.  Not quite sure yet, depends on what I am feeling like doing tomorrow.  I am going to get an order placed for some 18 gauge and 20 gauge Tefzel wiring, an assortment of terminal connectors and other wiring goodies.  I’ll probably go ahead and order my pitot mast, I still need to decide on Dynon or Gretz mounts.  I will be needing to get it mounted in the left wing before I but the top skins on.