Securing the Left Wing in the Stand

Not much to report on tonights work.  I got the left wing completely secured in its stand and made sure the aft spar brackets were secure.  I started out by making sure the wing spar was level as possible and had no twist in it.  I still have a bit of sag towards the middle, that I need to figure something out on.  I will probably go the route of using bottle jacks like everyone else. Once I was happy I had it level, I drilled the mounting holes for the outboard main spar bracket. 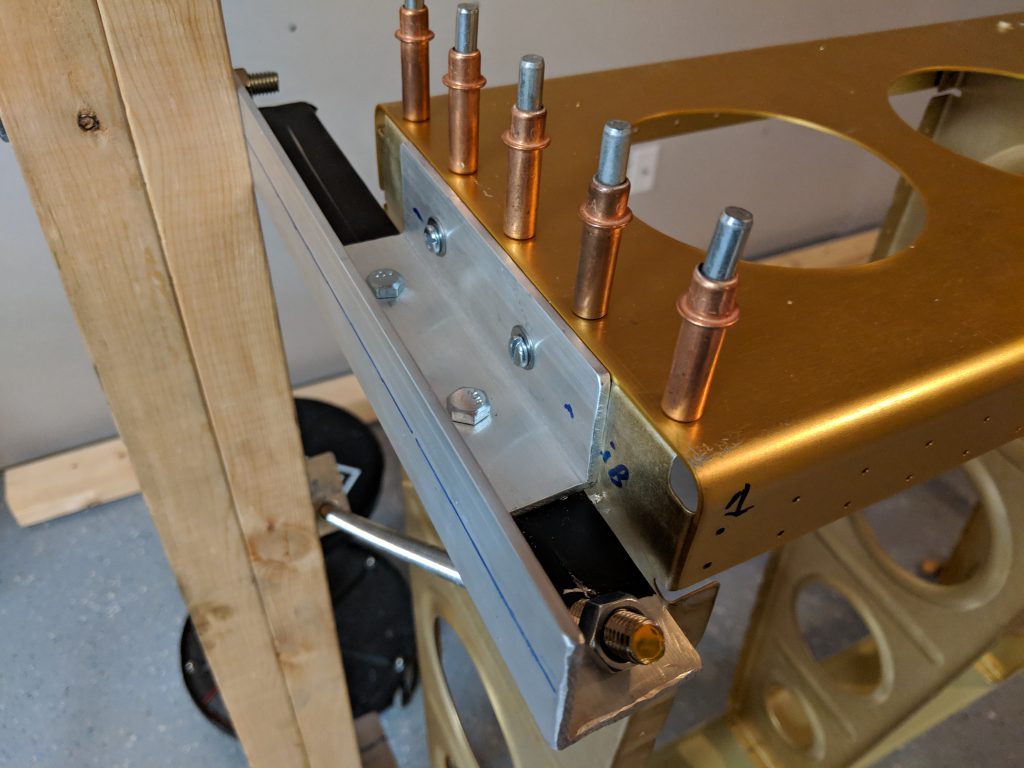 And then bolted them to the horizontal support arm on my wing stand.  I used 1/4″ bolts for this, as I had plenty of them. Next up was to secure the aft rear spar on both the inboard and outboard sides.  After a bit of fiddling around with various parts and such, I decided to use aluminum angle and the existing 7/16″ tooling hole in the outboard rib and a couple of C clamps. 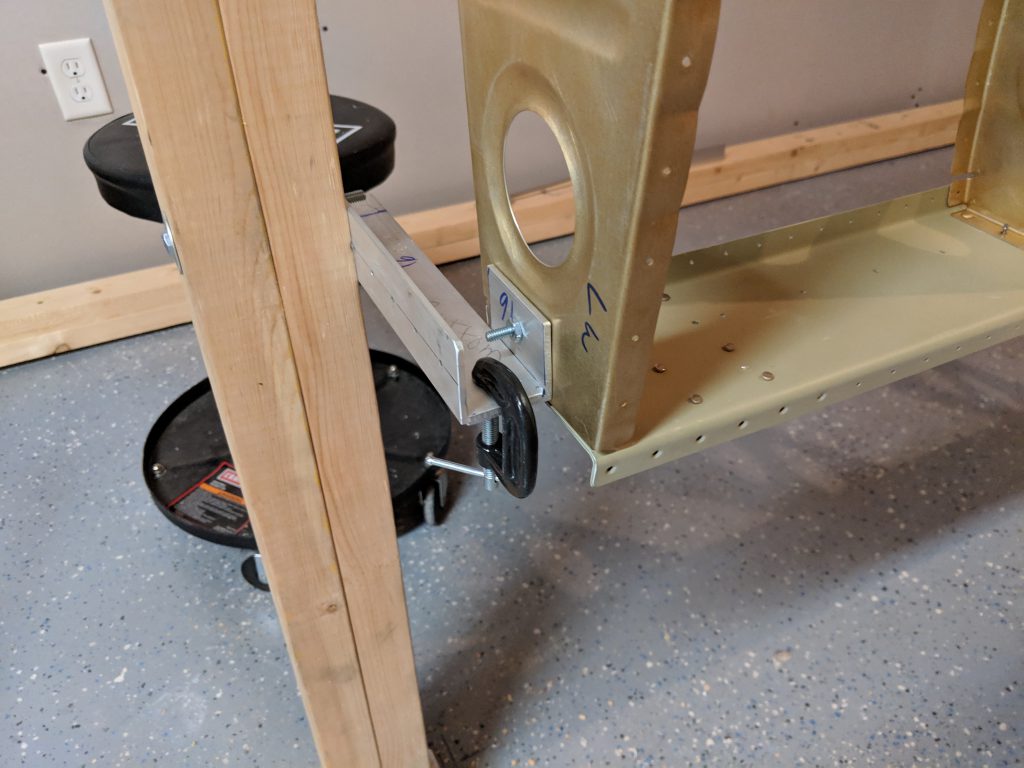 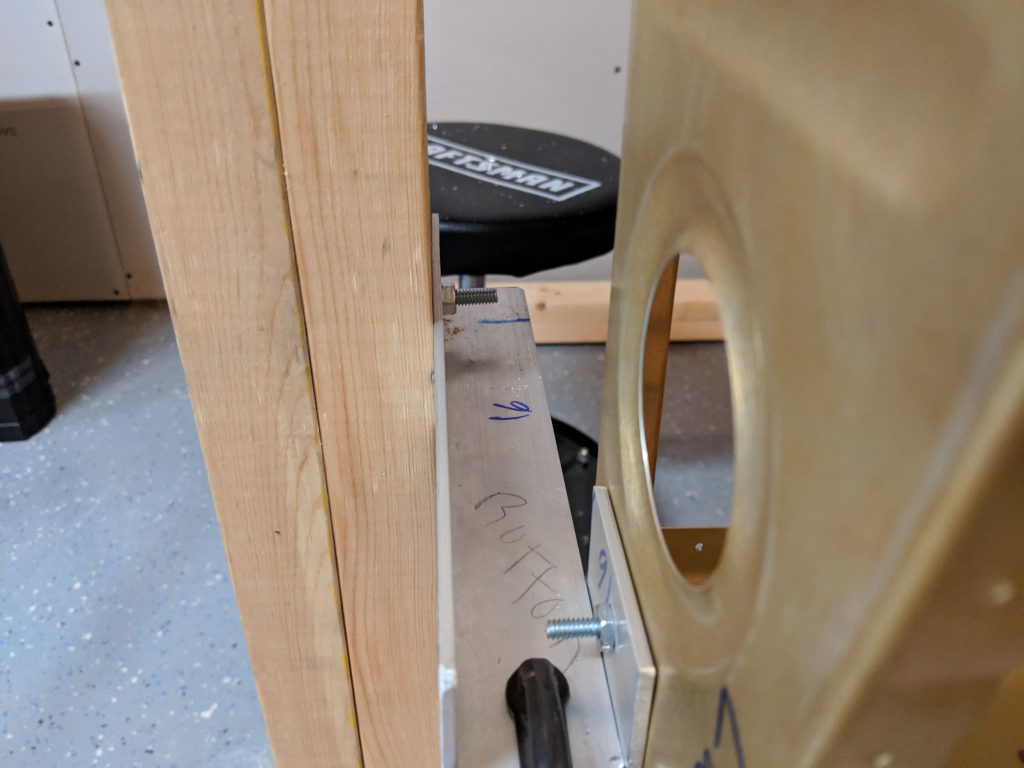 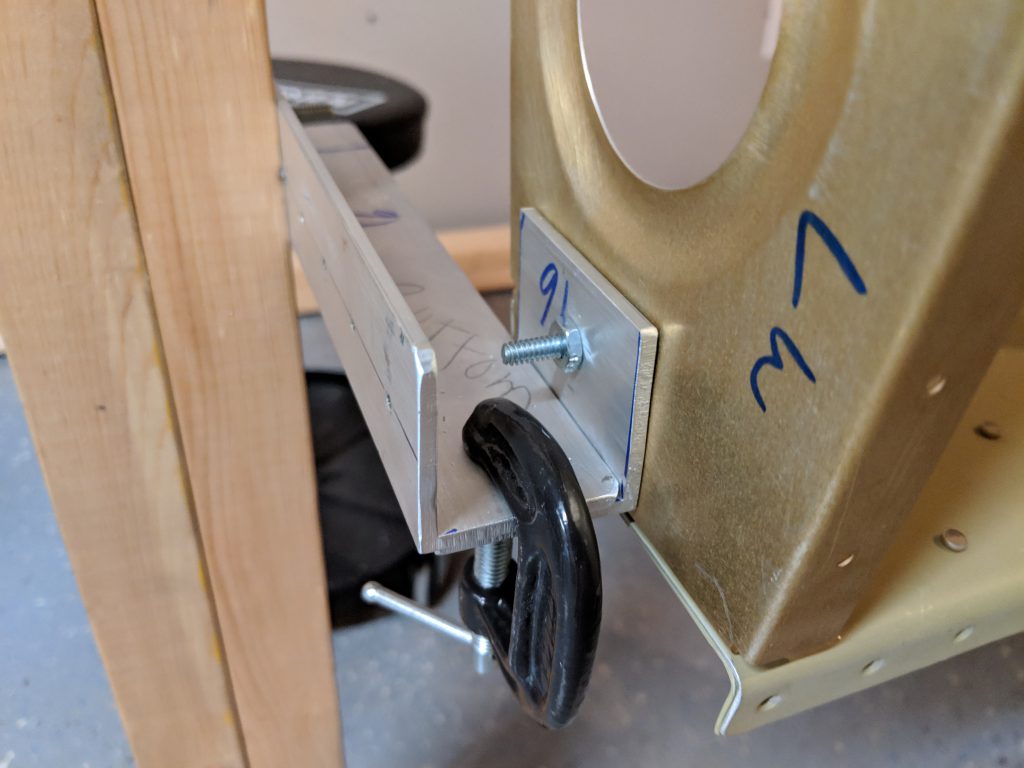 I didn’t get it in the photos, but I used a plumb bob to line up the all the outer most outboard holes in the main spar, outboard rib, and rear spar to make sure I had the mounting bracket holding the rear spar in the right position so all the holes would line up in a straight line.  Once I had that, I cinched the C-clamp down tight and moved on to the inboard side. I did something similar here, using some scrap angle aluminum, but I had to use a “spacer” by using a piece of 2×4 to get the angle to meet up with the rear spar doubler. 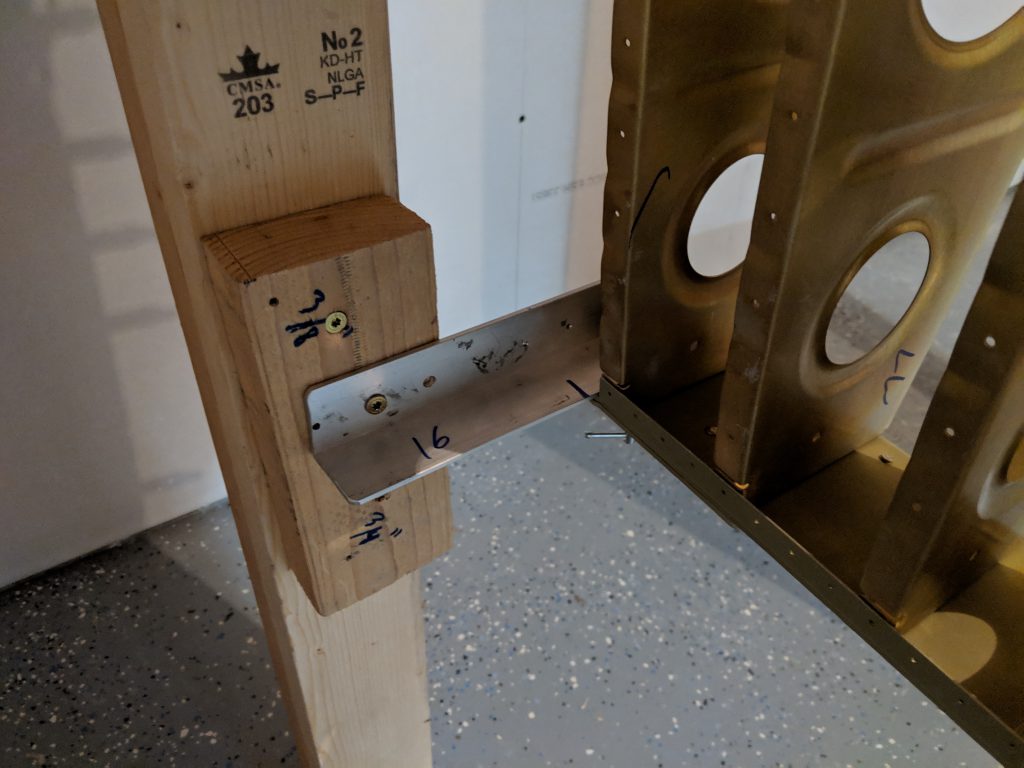 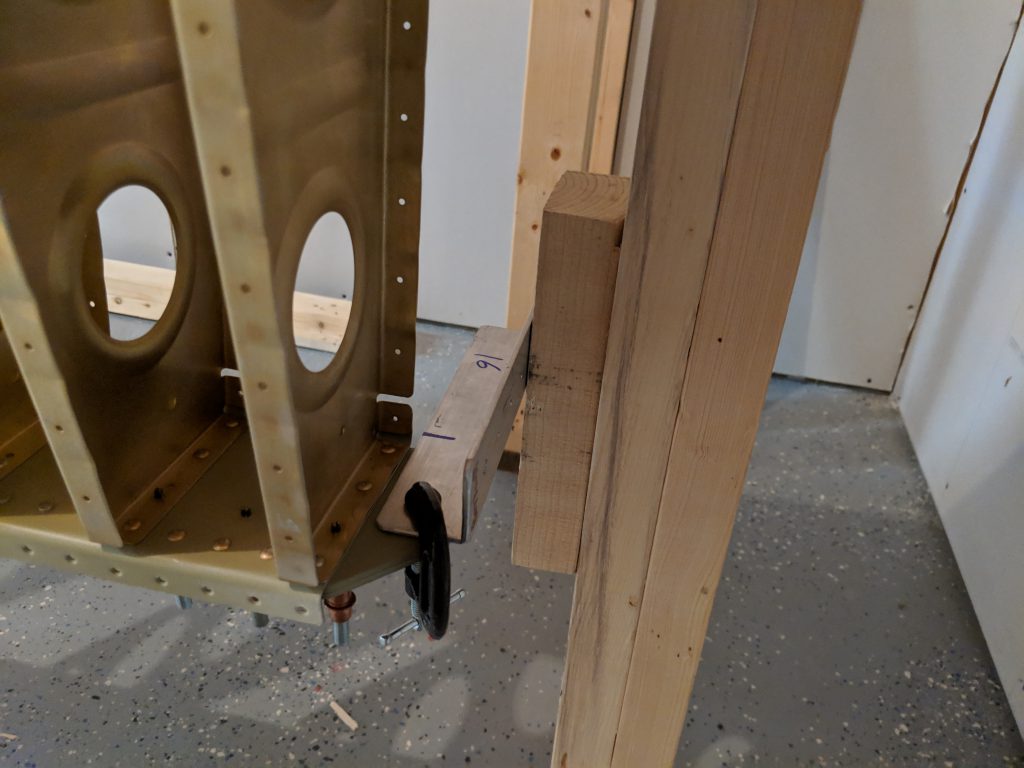 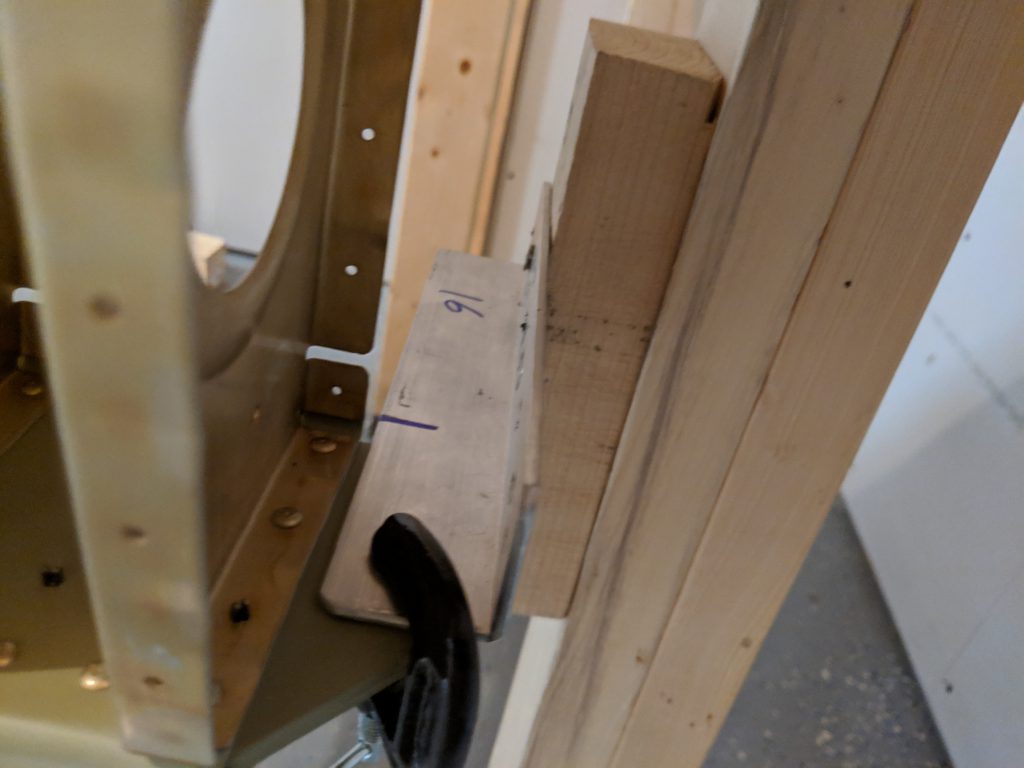 Using the same process with the plumb bob, I got it perfectly straight and then clamped it down. Finally, I clamped down the inboard side of the main spar to its horizontal support using C-clamps and a piece of plywood to help avoid damaging the expensive spar support bars. 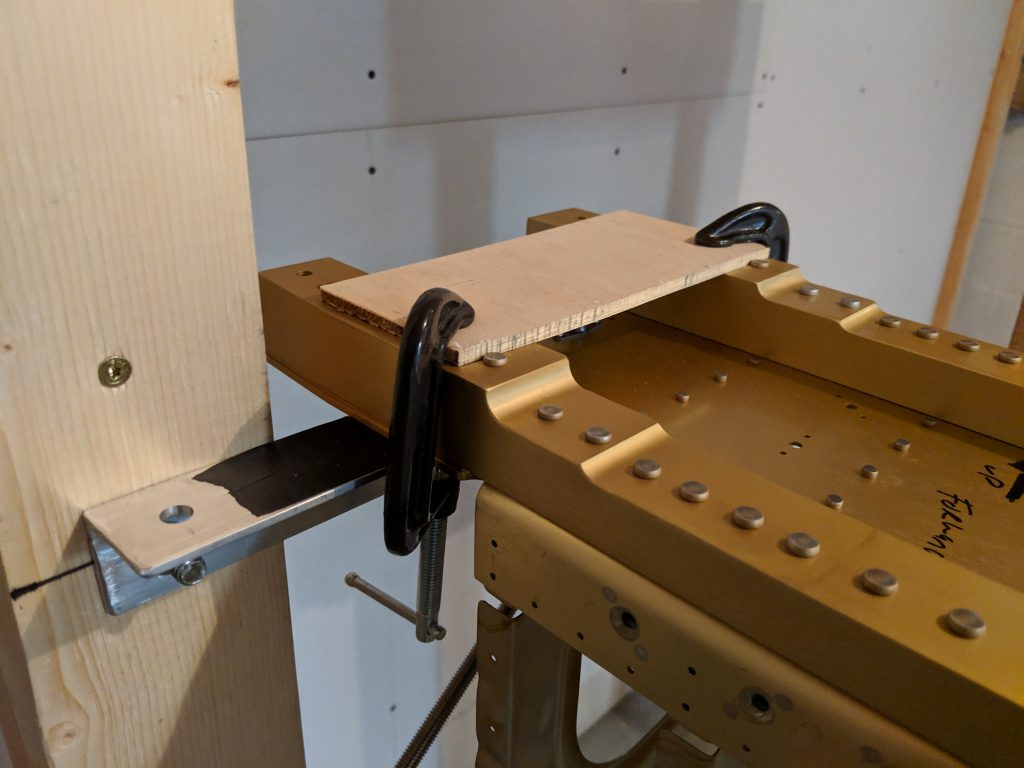 I’ll move on the right wing stand and getting it to this point, while I decide what I am going to do to support the middle of the wing to prevent sagging.  That wraps it up for tonights session.   Here’s all the photos, including some closeups of the wing stand and its adjustments I made.